Spring at the Ball Fields 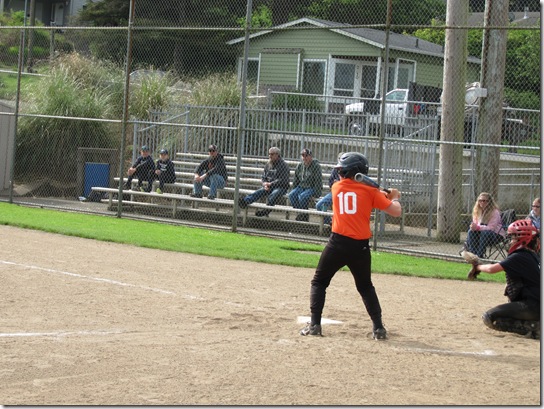 We’ve spent a great deal of our spring at the local Ball Fields.  Our town has a beautiful facility with 3 fields named K1-K3.  We play on K1.

Last year was Jon’s first year playing outside of Homeschool Sandlot Baseball in Bend, Oregon. I played softball as a kid and a bit of co-ed as an adult, and love the game. I’ve spent summers following around the Oakland A’s. They are still my favorite team, Lord bless ‘em.

Last year Jon spent the entire season learning the rules of baseball.  The technical wording and rules of the game.  He’s in the Major’s Youth Baseball League for kids ages 11 and 12. There was so much about the game that we both didn’t know for these ages. Balancing mind and the body last year was a challenge for sure.  Being physically able to react, and having it come naturally was not possible. Always thinking of what to do, and then how to do it.

This year he learned the mechanics of how to really work on the field.  How to play 3rd and short stop, how to know where to throw the ball, watch the runners, which runner to try to stop. How to work with his team mates for developed plays. In depth learning of how to run the bases and depend on your base coaches. Following that ball no matter what. Sort of reminds me of kids playing the cups game with the ball under one cup. Where is the ball? 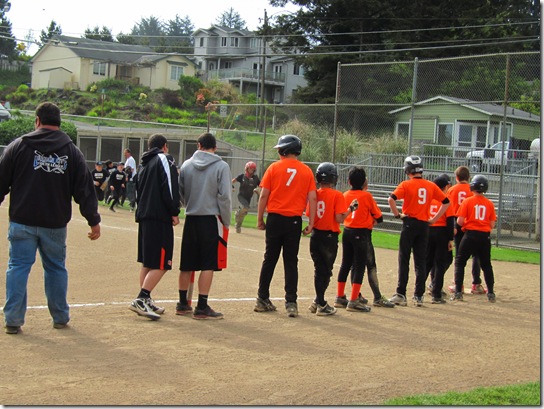 Both years, Jon has been able to develop friendships on the field that has lasted the summer and winter. Walking onto the field this year for his first practice, he already was familiar with most of the boys. Our town has three teams in this league, we play each other along with a team from north of us. With back to back practices and a lot of waiting times, we get to know the 30+ kids well.

One of our ‘fears’ instilled by strict conservative homeschool moms, was that he would gain these friendships and beg to go to their school instead of staying home. Or that the boys would be into activities outside of our home rules based on the Word. Maybe it is because we walked into sports when the boys were older, or because our town is so tiny, but neither of those instances happened.  The kids come from 2 public elementary schools and one private school. Jon is the only homeschooler playing, outside of TBall and Farm League. However, where the kids go to school has not really been an issue.  He has listened to dug out talk that shocked him, but it has been a learning experience for him. It has been strange for me to be surrounded by moms who run their families very differently than we do, but I have found, a foundation layer, of wanting the best for our kids and focus on those points.

One thing that has happened this year, is that Jon’s hitting has gotten really solid. He is batting second in the line up, (compared to 10 out of 11 last year).  If he pays attention, stays in the right pitches, keeps his head straight and his arms level, listens to his coach – he can hit them out into the grass every time.  Don’t Swing at the High Ones! 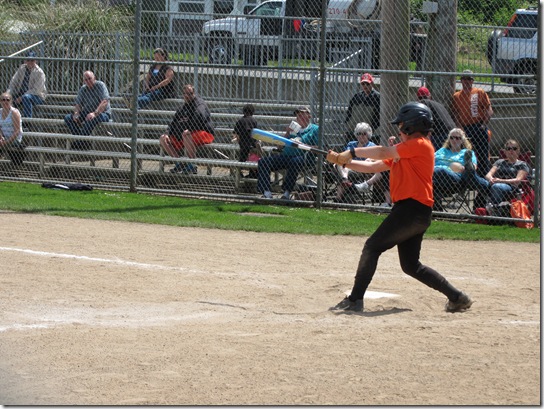 Double! And brought in two runners!

This weekend was Mother’s Day. Nathan volunteered at the church’s Ladies Tea and brought be back some goodies to the field. I enjoyed the sandwiches and shared the sweets with the team. We only have a couple of weeks left of ball. The team is improving every day – and I just can’t get enough.  I’ve heard a lot of people say baseball is boring – but I LOVE it.  If you browsed through all of these lines – maybe you love it too.

The Transparent Thoughts of an Unschooling Family of Boys - Answering the question - What DO you DO all day?
View all posts by +Angie Wright →
This entry was posted in Some Schooling and tagged Baseball, HomeSchool, League, little league, Majors, sports, youth league. Bookmark the permalink.

1 Response to Spring at the Ball Fields