Why do we teach our kids? Why train them at home? Why have a relaxed learning style?

It happens – to you – as the adult. You figure out that you have a question. Or that you are looking at something that you don’t have an explanation for. A need develops. You need to figure it out. You google. Now you might even Facebook. Wikipedia gets you in the right direction. Then you head to the library. Ask a friend. Visit the person doing it. And you learn. Or – you learn that you really don’t need to know . . . 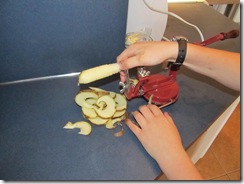 Why would this be any different for the child?  As you grow past the years of Alphabet, Colors, Basic Math Sets, Tying Shoes and giving Speeches – how do you spend your day? 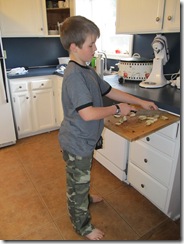 Together.  Working, playing, exercising and growing side by side.  Over the last several years, Jon has been in and around the kitchen. I’ve eaten my fair share of crazy over cooked eggs.  Last week I had Garlic Infused Toast with Honey and Tabasco Sauce. No Joke. I have videos of him as a 2 year old making Blackberry Smoothie on my 1960 white Formica counter with my best apron on . . . 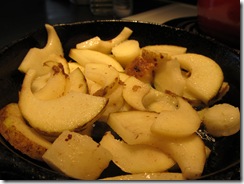 The mess happens. The failed attempts occur.  One son decides he just wants to eat, he doesn’t want to create. One son realizes the creation is the best part of the process, eating is just a part of the outcome.

We waste a lot of groceries. The Dog gets an extra layer for his winter coat. The Compost Pile gets a treat.

But over time – 8 years for Jon – he gains skill. Confidence. Perfection. Now he is at the point where he likes to tweak the recipe.  (Honey and Tobasco folks). Or – he tweaks it to perfection.

We show him how. He tries eggs from other sources. We watch Food Network together. He reads cooking books at the Library. He and the Punks from Pioneer Woman are on first name basis. No. Not really.  He probably wouldn’t ever touch a spatula if he could ride a horse all day . . . . Anyways. . . . 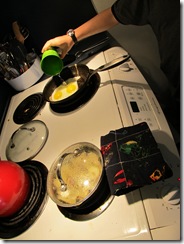 What I’m saying – I think – Is that learning is a day by day thing. Step by step. There is desire, curiosity and need all rolled up into one. We have had the sickies this week and have not felt the need to eat anything, but we have needed to – for nutrition.

I seem to be having the same conversation over and over with folks around town. About homeschooling. I hear the whistful questions of the moms with younger children. I hear the fear and hope mingled in the daring thoughts of those with middle school children. Can I Do It? Will They Learn?  Will I Mess Up? Will they Succeed?

Take it day by day. I have a passion for geography – because I apparently had no learning knowledge of geography in school. I am a bit timid about teaching 2 years of foreign language in the upcoming years, as I had none in school. We will probably do Sign Language, as we’ve already done a year and a half. . . sorry. Distracted tonight.

Point is – I think – Is that you can. They will. You won’t cover it all. They won’t enjoy it all. You’ll throw a lot to the dogs. You’ll lick your plate a few times. You’ll find how learning is enjoyed by each member of your family. You’ll see how you like to share your discoveries with your children. You’ll figure out what time of day is best. What products to use.

But you will never be able to do it. If you don’t start. Pray. Seek His Face. Get your Council from Above. Get the food recipes from Ree. Get encouragement from gals like us.

And – When you get tired. And you’re not sure if you are “doing it right”? You can take a break. Follow a delight. Change paths. But ya keep going. It’s gotta keep cookin’.

(Jon took these while the bread was in the toaster.)

PDub wouldn’t have to cook so much if her punks cooked more than they ate. . . But Jon is ten. I’m pretty sure he’ll flip. His brother did. . . .

Thanks for listening – I ‘ve got some cast iron to clean up.