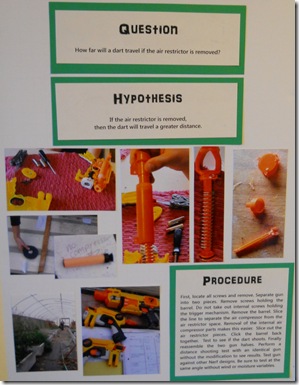 Next week is Science Fair time for our Co-op in Newport.  We’ll be out of town until the night before Science Fair – giving us the incentive to get our project done early! Nate’s presentation board was finalized this evening – after running to the instant photo hut 2 x’s (forgot photos in the slot).

Nate came up with his question, hypothesis and procedure.  He was excited to figure out if the Nerf NStrikes would shoot farther without the air restrictor.  If you look down the barrel, you can see a stick that looks like a + symbol. This is the “air restrictor”.

The hardest part of the scientific method, for both boys, was the reason – purpose part. They both sort of had a – Because I want To Know answer. It was hard to have them pin point why someone else would want to know.  Through his research, after his experiment, he learned why the dart travels farther. He thought that there would be more air – shooting it farther, but he learned that it is more likely less friction, allowing a smoother exit. This has created all sorts of conversation around the house this week. 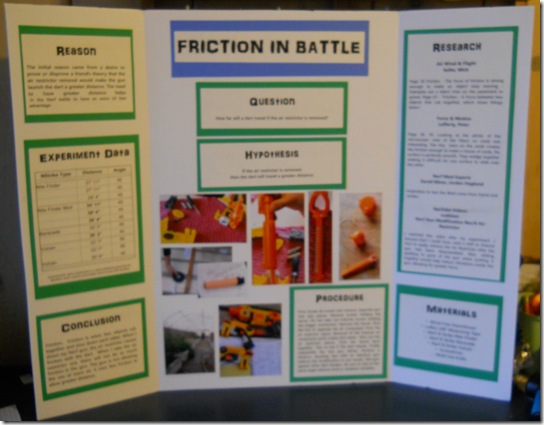 The Transparent Thoughts of an Unschooling Family of Boys - Answering the question - What DO you DO all day?
View all posts by +Angie Wright →
This entry was posted in Some Schooling and tagged Science Fair Entry. Bookmark the permalink.