Of Faith and Grace, Acceptance and Humility–and Transportation

I don’t even know where to start —

Way back when  – I was young and 18 – I started buying brand new – this year – cars. Every couple of years, I’d trade up for the next new year model, and then finally caved to Leasing. When we came back to the Lord in 1995, this was one of the areas that God said – he was going to take control of – that we needed to change. We turned in the latest greatest vehicle and bought a lower end model – at a price that we could pay off – in a short amount of time. No more leases. No more HUGE loans behind those small 14 year payments. ha.

We had our Van paid off and were often a 3 vehicle family. Hubby’s/Mom’s/Farm Truck.

4ish years ago – our van was hit by a driver who ran a stopsign, Tbone style.  Totaled the van.  We took the monies and bought a new to us car – that we had not researched. Immediately – it started becoming a money pit – and unreliable to take anywhere but the grocery store. No more trips. No more driving to family’s homes. No more driving.

Finally in May of last year (2011), it quit going in reverse, and then a month later quit moving forward as well.  The cost of fixing this damage was beyond what we wanted to pour into it, we sold the metal to a scrap yard and sold the tires on Craigslist – and didn’t have a car.  For 9 months.

Now. We say we are homeschoolers. But we rarely learn the ‘good stuff’ at home.  We like to dig into the community. Events. People.  Well, since May of last year – no more trips – at all.

In January – I was at my ropes end. I begged the Lord to let us get a small loan to get another car.  Begged. Pleaded. I even got a loan approved incase ‘the right car’ came along. Small manageable payments. I even went to our one car dealership in town to get acquainted.  Each time I’d move forward – I’d hear – “No. You are going to drive the car I give you.”  Well Lord, Hurry Up!!!

In January – we were able to buy what I lovingly referred to as “The Go-Cart”.  A 1992 Subaru Legacy – that had sat next to the Pacific Ocean for 2 years.  It was only $300.00.  We spent a lot of time replacing everything that rusted off while we were driving. It became a semester of autoshop for Nate and I.  He replaced just about every part in the car.  Meanwhile, the 1991 Ford Farm Truck we were driving – started falling apart too.

Oh Did I mention? When we moved here, we sold Dad’s car – and kept the Truck – so our only transportation during this time is an old farm truck that seats 3.

The end of June this year, the Subaru stalled on hwy 101, hubby said it sounded like it ran out of gas.  We had it towed away.  Weeks of 3 different mechanics could never come up with what was wrong. We tried about $150 dollars in misc parts, that didn’t help, and about $150 in services. To still not have a car.  At this point – I keep arguing with God thinking – Um – God?  A new car payment is WAY less than what we are paying to fix this non working GoCart. PLEASE let me know if you still don’t want us to buy a new car!

I’d only hear – “You will drive the car I give you.” and my heart would be flooded with peace.  And a slight tinge of frustration.

The people who had the go-cart when we had it towed (again three separate people involved??) pieced out the car, paid everyone off, and ended up with $100 cash and the promise that they would sell the tires and pay us. We found out this week, that they did sell the tires, but they drank the money away. Sigh.  I really wanted to piece out the car ourselves and sell the tire ourselves, but it was SO outside of our control. This morning, knowing we will never see the tire money – I am at peace, but sad to live in such a fallen world.

Which brings us to the next step in the story? Ya’ll still here?  Still with me?

She has an incredible story – all of which I can’t really share here – but the bottom line is:

She has this Subaru Legacy Outback. It’s not working for her family – she has to drive too many miles a day to make it work. She needed a smaller / gas saving / car for herself. She had gone to the dealership a few times to trade it in, but heard a “no” from that still quiet voice.  Each time she’d try, there would be a no.  She finally asked – “What am I supposed to do with it” – and heard – “Give it to the Wrights.” So as she called and was meekly and quietly telling me this story – I think She expected me to think she was crazy. She said she had been trying to clarify this with God for a couple of weeks and just wasn’t sure.

By “Friend”, at this point in the story – I have to use that loosely.

I was friends with Tonya at http://www.thetravelingpraters.com/ following along on her Field Trip Fridays.  At the time they were full time RV’ers blogging about their adventures. A fellow reader started noticing my comments and contacted me – as we lived about 2 hours apart. She came over to meet me – and we have been fast friends ever since. This past June, she brought one of her childhood friends over for a relaxing day at the coast and a hike to Drift Creek Falls. I spent the day chatting with Taunya (she is a Taunya too) and Eva, the friend, walked with her girls and meandered in the forest.

This was the extent of our “Friendship”. I have since come to learn of her story – and Man I wish I could throw in a couple of thousand more words to share – but I just love her now even more.  A true warrior princes, wounded in battle, moving forward.

We agree that the situation could work – and hammered out a few details.  Each week though, something would happen to delay or seem to prevent us getting the car.  At one point, I thought the transaction was off, and then it was back on again.

Well. This weekend – It happened!  We got the car! Drove around Portland for the day – Drove to a Homeschool Field Trip Day – and drove home!  It’s in the driveway – wanna see? 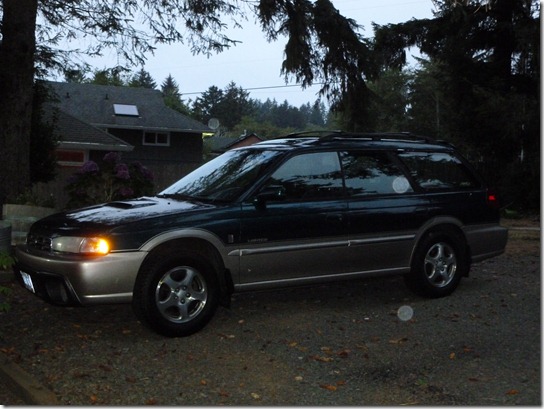 It’s a loaded special edition – all the bells and whistles and more whistles ya just would never think of in a car – including TWO sunroofs! Crazy.  Just need to get my Bark Less Wag More sticker, an Oregon Surf Shop sticker and my Girl Reading Sticker to make it mine. Then I need some rack pads for the surf boards, and some straps and it will be good. to. go. 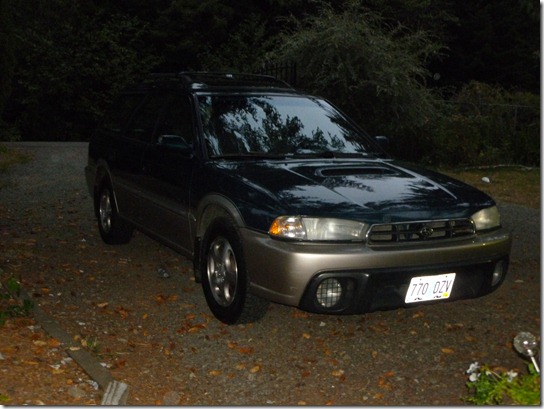 You might not believe me if you’ve read this whole post – but I really am speechless. I’ll work on a second post – less factual – and more feeling – and try to explain. 😉

The Transparent Thoughts of an Unschooling Family of Boys - Answering the question - What DO you DO all day?
View all posts by +Angie Wright →
This entry was posted in Morning Ramblings, My Journey and tagged Blogging, car, free, gift, God, HomeSchool, New. Bookmark the permalink.

5 Responses to Of Faith and Grace, Acceptance and Humility–and Transportation