A lil birding re-cap.  Our Outdoor Hour Challenge adventures had us looking at birds with intention,  listening to their calls, seeing which colors we could find and making lists of our backyard birds. I wanted to break up 2-3 birding posts, but we are moving into March, so I thought I’d share from the camera. Jon took quite a few of these – I hope you enjoy a tiny bit of birding from the Oregon Coast. 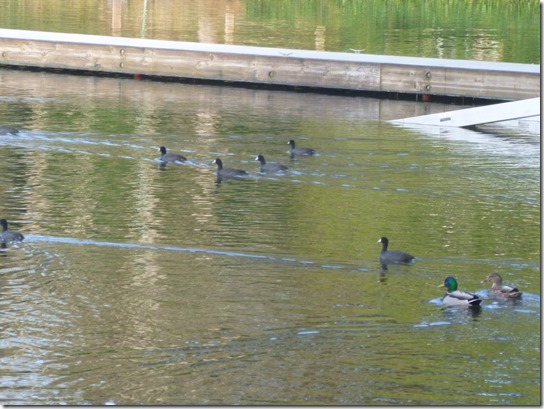 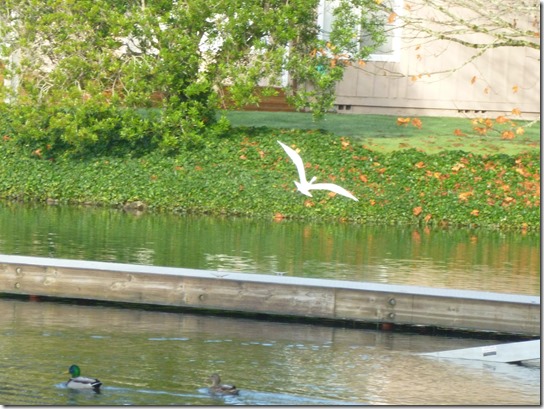 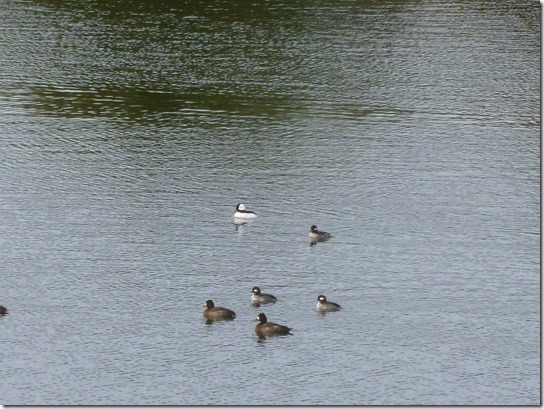 Above: Coots, White Egret, Buffleheads  – all in front of the house. 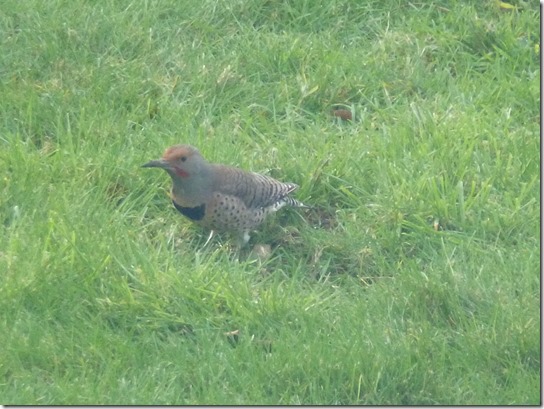 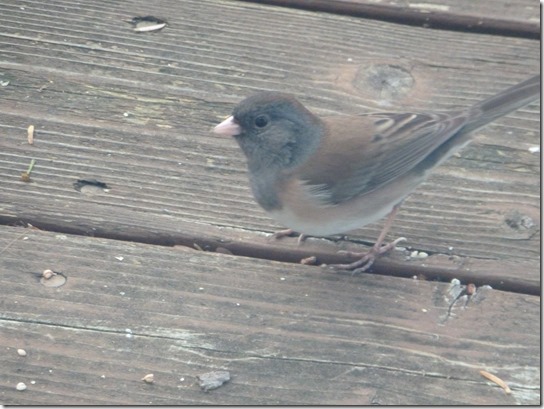 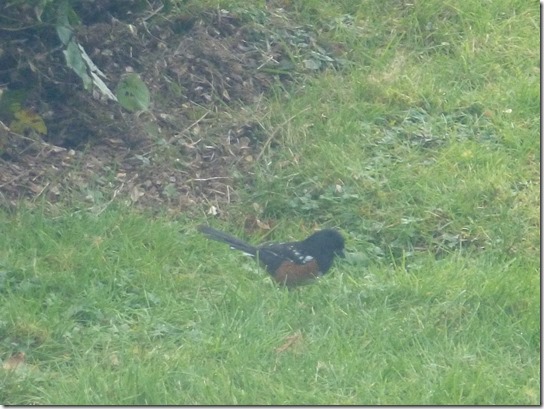 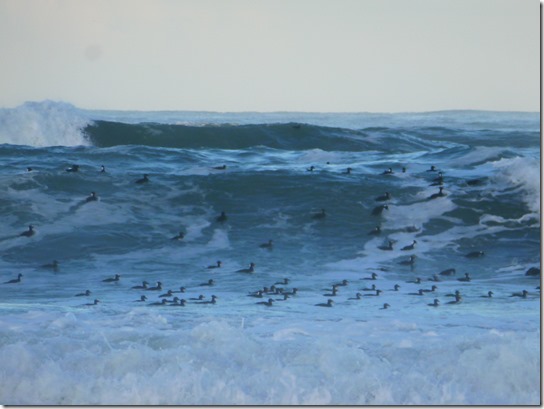 Surf Birds in the lineup with the big boys at Nelscott Reef. Early Morning watching the Tow Surfers launch out. 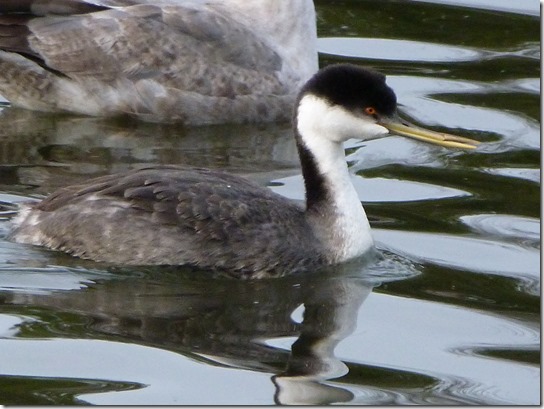 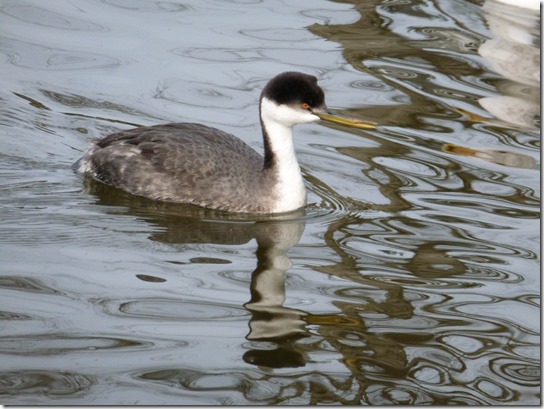 Lil Grebe has been around for the winter. Really friendly. Grebes usually dive when anyone comes near. Someone forgot to tell this one that he’s not a mallard. I think he has a broken bill.  I like having a grebe in our little raft of birds! (taken from our dock) 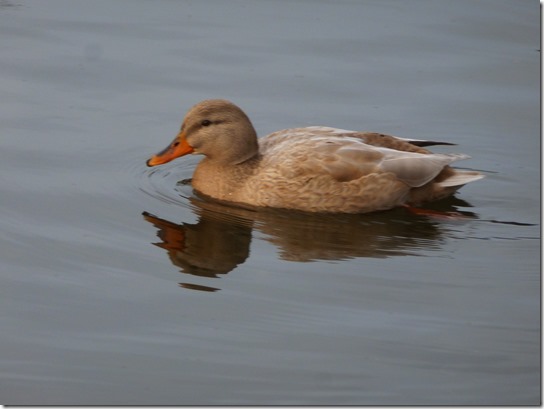 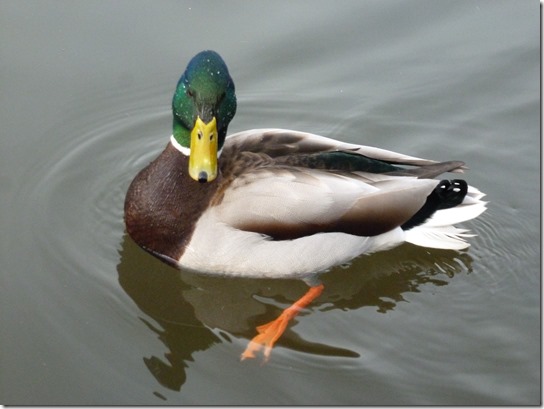 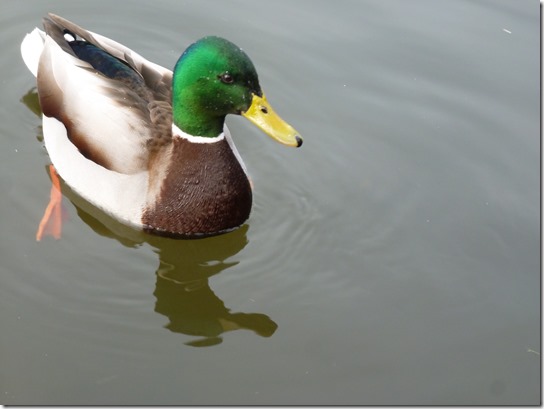 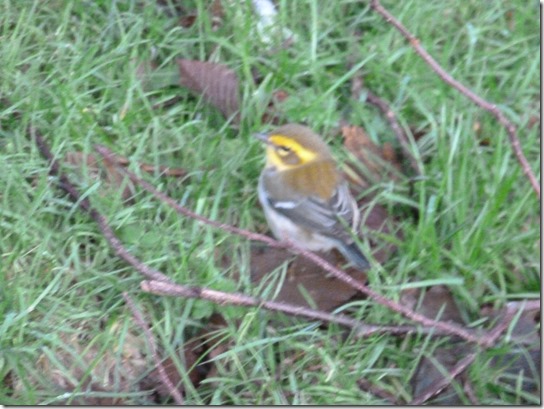 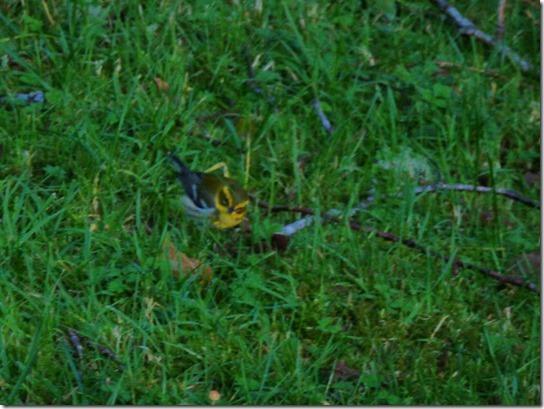 Townsend’s Warbler. There were 5-6 on the hillside. They let me get really close, but it was twilight after sunset so my camera had a hard time. 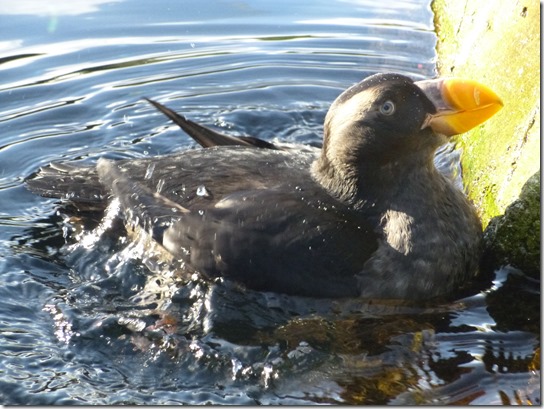 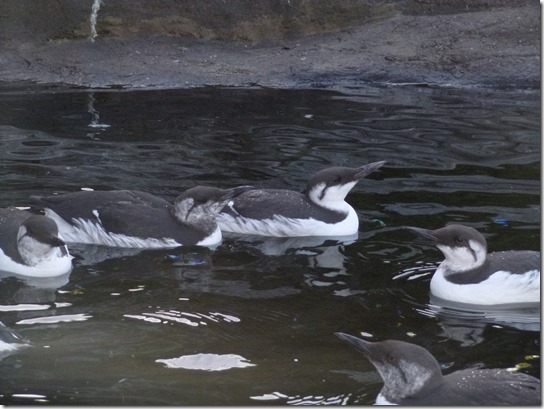 Sorry – these were cheats from the Aquarium in Newport. We do have both of these in abundance near us in Newport though. 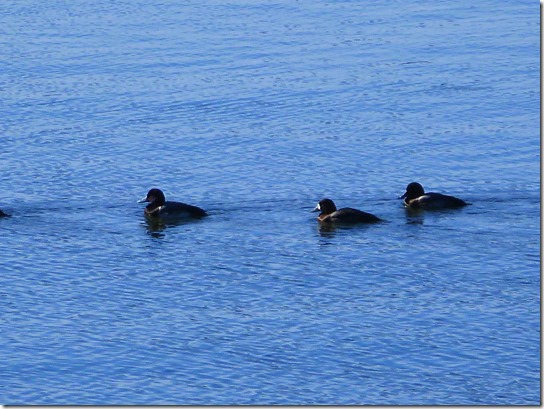 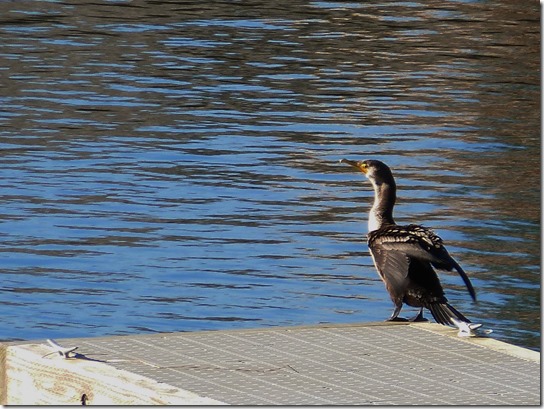 Scaup and a Double Crested Cormorant – Didn’t see the pics for the Northern Shoveler and Blue Teal but they have been in the yard this month too. 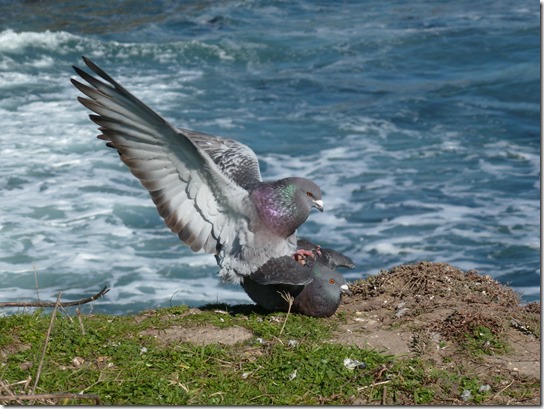 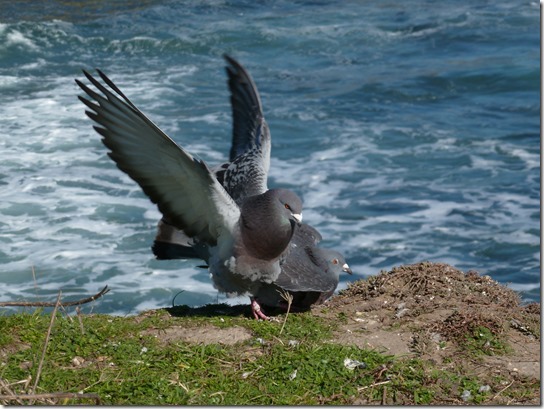 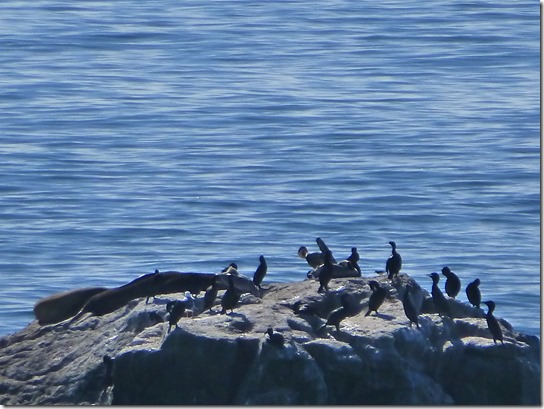 Santa Cruz above – there was a rock out just beyond the cliff where we watched – Not sure who all is up here, but it is fun to watch them come and go. Below our Brown Pelican. We have many of these in Newport and Lincoln City. 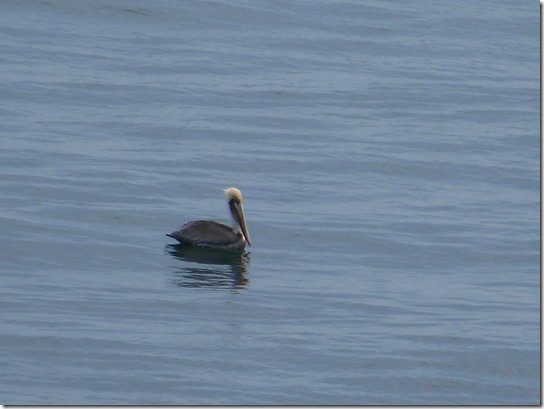 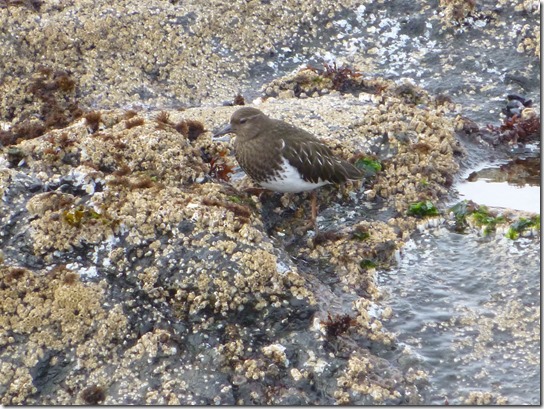 Closing out our photos is a local shore bird. So cute. Eating at the Low Tide Café.

The first year we moved here, I was obsessed. Once I figured out that there were several varieties of ducks, I wanted to know their names. At first glance, with changing colors and shadows, they all look like Mallards. Then you can see the bills are different, tail feathers longer or shorter, head shapes and length of necks.  Same with the sparrows. I used to just call them all Sparrows.  Now I know their names.  Junco, Grossbeak,  – they like being called by name as well. Knowing their songs helps tremendously. Song Sparrow is the look out. He lets the whole gang know when I step outside. A lone sentinel on the box hedge by the water. Once he calms down, after  few minutes, they call come back. The Osprey has quite a call – especially when the bald eagle is around. A little short screech lets me know someone is fishing where they oughtn’t. The gulls let me know when the neighbors or boys are tossing compost out. The morning warblers, juncos and robins let me know it is light enough to open my eyes and peek at the alarm clock. I flip over in bed and grab the Kindle and check in on FB and Google as they sing to me. Silence. The whole lake will turn to silence as a raptor swoops over head. Especially in the season coming up with babies soon to peek out. The Geese have been missing for a while – so I’m expecting the trains of babies to float by soon. Each day the train grows longer and longer. I feel so sorry for the mums and dads that only have 1 or 2. Mom and Dad swim around the lake with a straight line of babies in the middle. The Mallards will not have tiny ones til the end of May, mom swims them around teaching them where to food while dad and ‘the uncles’ keep point guard watch around.  I hear the Wren as I walk near the forest, so quick and hard to capture on my point and shoot camera.  I look forward to the return of the Rufus Hummingbird when the pink flowering bush makes it’s glorious entrance next month. Watching the shore birds dance as the shore break ebbs east and west.

It is strange, how something I’m so passionate for – was so hard to write about this month. We’ve been pretty busy.  Looking forward to Mushrooms and Lichen this month! Discoveries to be found!!!

The Transparent Thoughts of an Unschooling Family of Boys - Answering the question - What DO you DO all day?
View all posts by +Angie Wright →
This entry was posted in Beach Schooling, Lake Schooling and tagged Birds, harmonyartmom, HomeSchool, HSBlogger, Nature, Outdoor Hour Challenge. Bookmark the permalink.