Patterns of Evidence, Exodus, a DVD Review and Giveaway 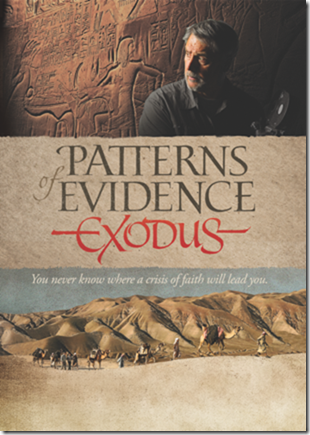 I was interested in Patterns of Evidence, Exodus as a review to be able to show the teens that gather here in my home, show them the physical evidence that the Bible is true, historically, with quite a bit of archeological evidence to back it up.

I had no idea that the tables had turned 50 years ago, so much so that now the majority of the archaeologists and historians do not believe that there is any ANY hard evidence for the Israelites to even have been anywhere near Egypt, to have had a need to leave, or Exodus.

I think I watched the entire first half of the movie with my jaw dropped as expert after expert explained away why the Bible story isn’t true. Dates, places, digs. I was astonished. It was compelling to watch, and hear how it can all be explained away.

After hearing what Timothy Mahoney was up against, the tables turned, as he walked the same places, filming, interviewing, and looking at the timeline with better clarity. The excerpt below says that “This scientific documentary’s goal is to communicate the TRUTH of the Bible and help equip believers with defending their faith and the Bible. “ We no longer live in an age where people believe, that even historically, the stories in the Bible are true. In my day as a teen, the flood, creation, and revelations were considered unbelievable. Now, the entire thing is.

I think this is an excellent film for all ages. Specifically if you are like me, a bit older, and grew up seeing the evidence, archeology, artifacts, etc point towards verifying the historical data in the Bible.  It is hard to wrap your mind around how the last 50 years has wiped that away, and you’ll see the struggle if this generation to believe in the facts.

If they can’t believe in the facts – how will they make the turn to believe in a person who came from this line, who died for their sins, and offers Kingdom Victory Living today?

I have a copy of the DVD available to give away –
Comment below to enter. You’ll enjoy it.

About Patterns of Evidence Exodus:

For more than 50 years, the vast majority of the world’s most prominent archaeologists and historians have proclaimed that there is no hard evidence to support the Exodus story found in the Bible.  In fact, they say that the archaeological record is completely opposed to the Bible’s account.  This view of extreme skepticism has spread from academia to the world.  The case against the Exodus appears to be so strong that even some religious leaders are labeling this ancient account as historical fiction.  Filmmaker Timothy Mahoney begins with the questions, “Is the Bible just a myth, or did the archaeologists get it wrong?”  He decides to tackle this issue wit a deliberate scientific approach.   After examining the details in the biblical text, he journeys across the globe to search for patterns of evidence firsthand.  The result is the most in-depth archaeological investigation into the Exodus from Egypt ever captured on film.   This scientific documentary’s goal is to communicate the TRUTH of the Bible and help equip believers with defending their faith and the Bible.

Check them out online!

“Disclosure (in accordance with the FTC’s 16 CFR, Part 255: “Guides Concerning the Use of Endorsements and Testimonials in Advertising”): Many thanks to Propeller Consulting, LLC for providing this prize for the giveaway. Choice of winners and opinions are 100% my own and NOT influenced by monetary compensation. I did receive a sample of the product in exchange for this review and post.

The Transparent Thoughts of an Unschooling Family of Boys - Answering the question - What DO you DO all day?
View all posts by +Angie Wright →
This entry was posted in Movies, Reviews and tagged #PATTERNSOFEVIDENCE and #FLYBY. Bookmark the permalink.

2 Responses to Patterns of Evidence, Exodus, a DVD Review and Giveaway