Hands on Reading–Creating the Picture of the Pitcher

Do you create stories when you read? I do. I can create the entire landscape, rolling green hills of waving green wheat,  the detail of the costumes, flowing linen dresses floating behind running young ladies, even feel the temperature of the air, the crisp windless morning with the warmth of the sun on their cheeks, smelling the outdoor air, the wafting coffee from the house, the earth full of spring rains.

What I am finding out this month – is that although my youngest son can tell a story a mile long, draw pictures with exact detail, and enjoy observing the details around him –

He has not practiced creating these stories when read to. I am thinking now, that it is why he prefers simple picture books at the night time reading. Why the car trips give him headaches as we enjoy a good book on tape, and while he moves to the other room when we enjoy the outloud reading at home.

How did we discover this?  We have been narrating stories this week, something we haven’t done directly this year – and it took quite a bit more effort than I thought it should. It worried me that his reading comprehension was off. I even talked to the librarian about it this week. Checked out several books to help me see what he was doing.

I didn’t see the pattern – that if there were any pictures at all, even in smaller chapter books, he was more interested in the story, even if it was a dull story. He would read the books he liked, and could talk about them for an hour. But a paragraph of text in the readers without pictures, nothing.

So this week – the light bulb came on – as we were reading a simple fable, The Crow and the Pitcher.

We spent five days hovering around this Fable.  He had commented on why there were so many sentences about the bird going back and forth with the rocks. He questioned the Pitcher word. He questioned the drinking.  It is hard to tell when my young ham of a son is  really lacking in understanding – of if he is making fun – so I brushed it off.

But on the last day of the assignment – he was supposed to re-write the story in his own words. An that is when the light bulb came on. The story he recreated had the bird at a well, the bird had moved the rocks to dig a hole, so he could walk down a long slope underground to get to the water. He drew a detailed photo of his narration. And I asked why the bird would dig such a hole underground.   – So he could get to the water, to get a drink.

Two things were at play – he didn’t picture a fictional bird on a fictional landscape trying to get water from a vessel of water above ground.  He didn’t understand the displacement aspect of placing the rocks in the vessel to get the water to rise. As the bird was busy moving rocks to get a drink – he was not creating reflection of the direct words spoken, he was re-creating the story to fit his understanding.

So we went to the kitchen.  Found a pitcher – or beaker. Found our rocks, or Black beans that needed soaked anyway. And he added one spoon at a time til the water reached the top.

It was only after the first 5-6 spoons that I saw the light dawning on his face, and the understanding of displacement, pitcher, water rising. Oh. Now the story makes sense. 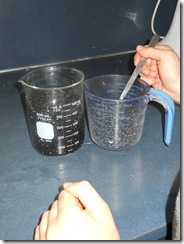 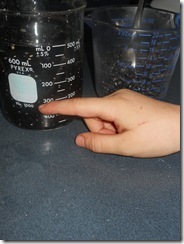 Then, the words flowed, he re-narrated the story, but his mind was off on the displacement aspect and he had a half dozen other stories to create as well. He quickly went about his work, a happy boy. He even tried quenching his thirst in the pitcher er beaker.

The moral – because all fables have them – one of the joys of being so close to the boys – is seeing these lightbulb moments. One of the joys of homeschooling in a relaxed way – is giving it time. Listening. Not pushing forward. Waiting to see what the bump in the road is. Prayer.  Had I panicked last week (or panicked to anyone outside of my dus bunnies residing in my brain) I might have had him evaluated. Labeled. Doubted myself. (ok I did to that a little). Changed curriculum. Changed a path. But time and again – over many bumps similar to this, my experience has proven – that time will reveal – or mature – the lacking skill.  I will purpose to read more stories with post it notes on the pictures, if I can’t find ones he likes without. I will purpose to have a game of re-telling the stories. Maybe Ms. Charlotte Mason was on to something after all.. . . Go figure.