Hello there! I don’t think I say that enough on here, I just jump right into sharing our adventures and don’t take the time to say howdee!  I really enjoy all of the comments and conversations on Facebook. I LOVE reading all of your blogs too. If you are a lurker and would like to share your blog with the readers – feel free in the comments on or on the Facebook page!

It is because of the Facebook Page that I have a fun story to share with you!  I heard the craziest ever news that for no reason in particular – I See Cards was going to mail out a pack of cards  for Pyramath, Prime Numbers or Fractions to anyone that asked for them.  I thought it was a far fetched thing, but I Liked their Page and  because we have been playing Pyramath Online for almost a year, and I was interested in finding out what card sets they sold. I sent them this tiny little note with my address:

We would love to try the cards- We have enjoyed Pyramath online.  I have not seen or tried FracTazmic or Prime Bomb.  I have two boys working on fractions and prime numbers.

Well, about a week later we received TWO packs of cards in the mail! FracTazmic AND Prime Bomb. Crazy Town!

Jon has been learning how to convert, reduce, add, subtract and multiply fractions this past month, so I was excited about a game that would actually make working with fractions fun. There are three colors of cards, Red, Blue and Green.  Red is a 16 base, Blue is a 12 base, and Green is a 10 base, the goal of the game is to play a Rummy Style of play, making sets of Wholes.

The Cards have graphics to show you how many it is worth.  The first round we were counting, a little frustrated, but really liked the cards. 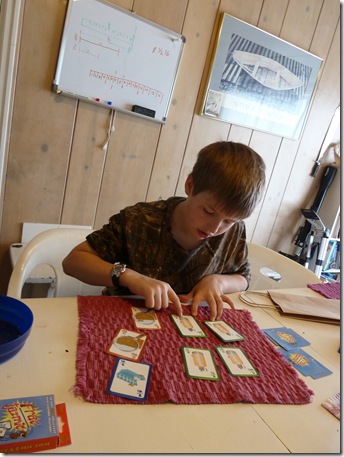 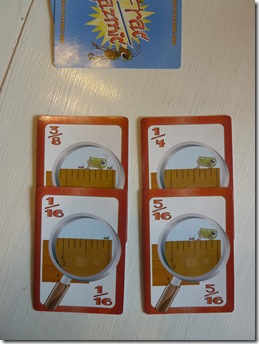 We made a color chart to help us – Nathan got it right away – but he explained how he did it so fast that Jon and I just stared at him. it was the 16ths that really got us, they are visualized on a 1/2 inch ruler, and converting 3/8ths to a 16 base visualized on a 1/2 – well, the party was needing a pick me up! After we wrote out the converstions on the white board, and then made a cute little colored helper graph – we’ve never used the graph since.

Isn’t that they way it goes? I think, as the website continues to be added to – it would be nice to have a little printable chart like this  – or – you could make one easily enough.

We played it 3 different times last week, one time with company.  Our 11 year old visiting friend goes to school in “the big city” up north, and REALLY  liked FracTazmic AND Prime Bomb.  He got to play it after we had already figured it out, I think that enhanced his experience a bit – because he beat us, repeatedly at PrimeBomb.

This afternoon we played with dad, and he caught on pretty quickly too. He loves playing Rummy and remembers playing War as a kid.  Oh- PrimeBomb is basically war. You capture a Prime Number card by having the largest non prime, i.e. 50 would capture a 2, and you capture a Non Prime by having the most or highest combination of primes, so a 3,3 would capture the 9.  Again, all of the graphics are on the cards to make it REALLY easy to play Prime Bomb, even if you don’t know what a prime is.

They really did send these cards out for free – for nothing in return but for us to like them. They had no idea that I like to blog, or that I have reviewed other products.  I liked them SOOOO much that I thought I’d share that LOVE of these cards with you! The boys ask to play “rummy fractions” every day. They have never, for the record, in the afternoon, every asked to break down a number to their prime, or reduce fractions, add fractions, or come to think of it, have ever said the word Fractions or Prime after 1pm – ever.

If you purchase any products
at shop.iseecards.com
you can use the promo code
mathisfun
for 50% off anything up until April 7.

Let them know the promotion sent ya, I don’t get anything for it – but they might get to see the “fruits” of their promotion! oh – and I don’t really think there is an “age” for these cards. The graphics will show what to do, the ability to learn War or Rummy would be the only need. It IS the MOST fun you have Ever had with Math!