I don’t know if you were around last July when we did the Frog Scavenger Hunt in Three Parts – The short version – is we looked everywhere – but it was too late in the year to find frogs in our area. So –

This year – as soon as we heard them croaking – we went a lookin’. 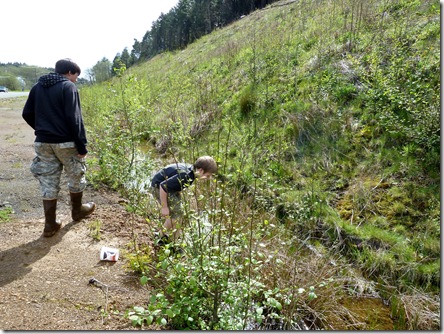 Strangely enough – the advice we received the most – was to visit this small ditch next to Highway 101 in a place locals call No Man’s Land – because – well – there isn’t any development there, one of the only pieces on Hwy 101 in Lincoln City.

We walked back and forth for over an hour. The frogs would stop their croaking as we would walk – and then start up again a foot or two down the ditch wild highway side stream.

These poppy seed sized eggs covered in orbs of slime were abundant throughout the area. Pushed up close to just about every plant.

The boys decided that since there was such an abundance, they’d collect some to watch at home.

They collected two sizes of tadpoles.  We have two one gallon size jugs of “Pond Water” that Jon has been replenishing  every couple of days. He skims about two  to three cups of water off the top, and then fills it with the pond water. We drive by the source often enough to keep the water filled.

I leave you with wiggly little tadpoles – Next up – Research – and Nature Journaling!

The Transparent Thoughts of an Unschooling Family of Boys - Answering the question - What DO you DO all day?
View all posts by +Angie Wright →
This entry was posted in Lake Schooling, Some Schooling and tagged Eggs, HomeSchool, Lincoln City, Streams, Tadpoles. Bookmark the permalink.