Ghost Pipe – No chloroform, or photosynthesis. It can grow without light. The leaves are scales, it is a parasitic plant – the stem has the feeling of a very strong bean shoot. “The Ghost pipe derives some water and nutrients from root fungi that area already in a mycorrhizal association with forest plants and trees. The Ghost pipe establishes its own mycorrhizal association with the root fungi. The Ghost pipe thus indirectly derives some sugars from the trees, delivered through the root fungi.” – From Ghost Pipe

You can imagine my excitement as I was walking along the path of the Cascade Head this weekend.  We watched the temperature drop from 68 degrees on Hwy 101 to 53 degrees at the parking lot.  A soft billowy cloud swirlled around the head – rain would splatter as we’d walk though the thicker parts. The trail would disappear – to reappear.  And along this trail – I found a Ghost Pipe.  A white transparent plant with a bell shaped 5 petal flower. A strong stamen and seed around, with strange scale like leaves. Strong and thick. At first glance they resembled a group of fungi, but upon inspection it seemed to be a flowering plant. “Strange looking, ghostly white things growing in woods are not always fungi.  …Monotropa uniflora known as ‘Indian Pipe’ or ‘Ghost Plant’ and it also has other common names.” uoguelph.ca website.

It has taken me all day to figure out what this little fella is – I finally found it on Andy’s Ontario Wildflower, Deciduous Forest  page – I just can’t tell you how much better I’ll sleep to night knowing what this little plant is! 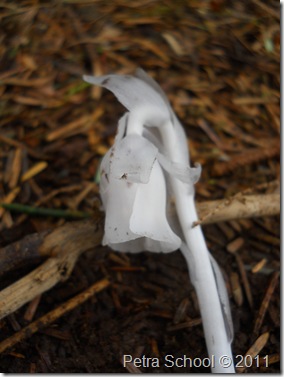 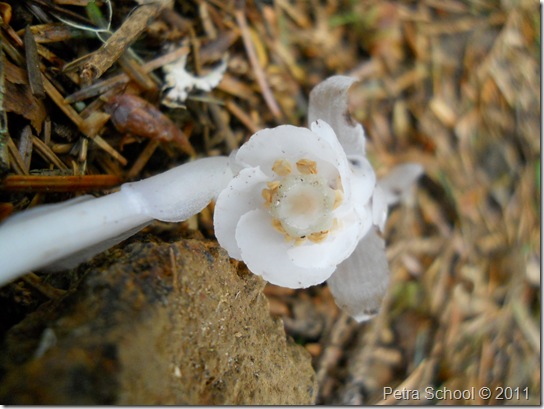 Guess what the boys and I will be putting in our Nature Journals tomorrow?

Added:  Found another cool paragraph – Read down on this site: http://waynesword.palomar.edu/pljune97.htm#ipipe

See how it works as a monotropa here: 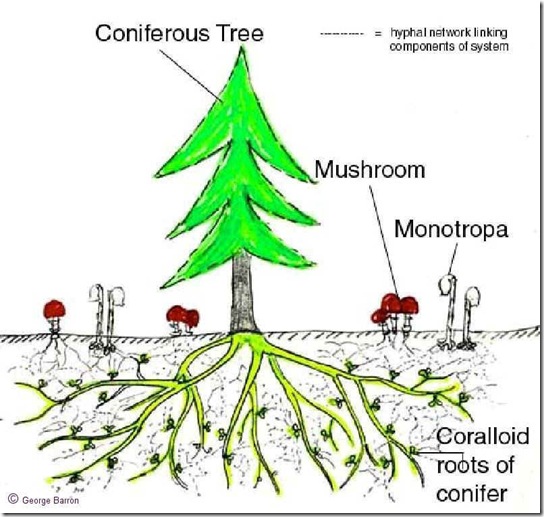 The Transparent Thoughts of an Unschooling Family of Boys - Answering the question - What DO you DO all day?
View all posts by +Angie Wright →
This entry was posted in Beach Schooling, Outoor Hour Challenge, Some Schooling and tagged Forest Botany, Ghost Pipe, HomeSchool, Indian Pipe, Lincoln County, Oregon, White Transparent Flower. Bookmark the permalink.