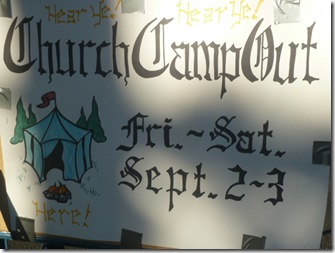 Y’all wouldn’t tell if I mentioned it took me almost 20 hours to learn to spell Renaissance?

The church was decorated – booths were all the way around the parking lot and the most important signs were placed about.

We arrived around 5 to set up our tents (Nate has his own, Jon and I set up the huge family tent), cots, tables and chairs – and to await the feast of the evening. Our contribution was 2 dozen baked Leg o’ Chickens.  I brined them for an hour using a recipe that I found online for Renaissance Fairs – and then baked in the oven, then placed on the BBQ at the fair.

Would you guess how the Battered Sausages were prepared?

Quite a few people were in costume, Nate in the black hoodie – was in his own  – he did strap on a decorative sword. We have a member of the vineyard that creates clothing for the Renaissance Fair – quite a bit of his work was on display by the participants.

Full Contact Sports were an option. I think this is from the little village that Great Great Great Granpa  Joe Kawasaki was born in.  Nate is on the right, Jon thought this was a hunting fair. . . .

Todd – The one that makes the outfits?  He rocks. Reminds me so much of my friend Ty. He was calling all the lads over to the archery lessons. I think “Or Else” was given . . .I might commission him to come over in the mornings to get the boys into their writing and math . . .

Archery for the shorties.

They spent the evening going round the grassy knoll to observe jousting, fencing, archery – really a lot of fun!  While mingling back and forth to grab a buttered cob or battered sausage or veggie with herbed sauce.

We sat under the stars til almost midnight, singing, listening to the 12 string guitar, drumming, praising the Father, eating pop corn.  Children ran around free with giggles of laughter, flashlight tag, board games.  They watched the cartoon Robin Hood on the big screen inside.  Hot Cocoa.  Good times. 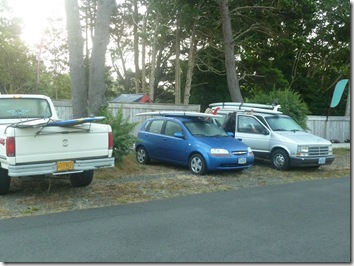 The mommies got up at the crack of dawn – 6:20ish – to hit the lake for a paddle board. We were out for a little over 2 hours.  Oh . The. Beauty.  I still do not have a waterproof camera – so I can’t describe the white egrets, blue herons, osprey, mist of the lake, fog of the ocean, mirror images of the water, grace of the water skiers, smell of the bacon from the cabins, encouragement of the moms, ache of the thighs and arms. . .

The put in – point. I love the  mist rising form the lake.

Gathering after a breakfast of eggs, hash browns, cinnamon rolls and fruit –

We gather at the river for a dad led baptism service. Well, at the lake, near the river. Is that spiritual enough?  I watched with tears in my eyes as step dads and birth dads baptized their children together with love and joy – dads baptizing daughters and sons, pastors baptizing men as they rededicate their lives publicly – reclaiming the call on their lives as changes ebb and flow, whole families coming to the water to identify in Christ’s Death, Burial and Resurrection to walk in the newness of life.  A sweet – organic – spirit led – joyful – identification with our Lord and Savior Jesus Christ.  Proclaiming Him. Alone.

So that we could come back and play some traditional family lawn games, 4 Square, Three Legged Race, Sack Races, Balloon Toss and – Balloon wars.

Jon was in the running for the finals with a final toss of 24’ 10”.  The dad’s won the Annual Water Balloon Toss at something like 39 feet?

After polishing off a lunch of Chicken Enchiladas, Spanish Brown Rice, Pinto Beans, Salads, Corn on the cob, Chips and Salsa and the toppings with Lemonade – We had a bit of room for s’mores.

And then we packed up! Around 1ish/2ish. Whew.

And, because we were camping on my friend’s birthday and she has asked us what is in our camping pkg, I took a few photos of how we store our gear.  We have one grey tub with this lid – all of these items stay in this bucket, used and returned while camping.

Next – Since Darren and I both went to boot camp – we each have a green bag – one for tent supplies, one for sleeping supplies.

With our cots, they make a nice little pile, a propane stove and table round out the supplies.  I have a laundry tote full of my nature journals, board games, books, bible, personal supplies.  When we camp and cook – I have a three drawers that separate. A drawer for Paper Plates/Ziplocks/Bags; Seasonings-Tea-Cocoa-Oil-Extras; and Silverware and Cutlery. We prefer to use metal silverware – if you don’t have a spoon – you don’t eat, so they usually make it into the wash tub.  Except – one year we camped next to a little 2-3 year old spoon thief that thought they made great digging tools. Ever since (and during that camping trip – we now have a bag of plastic spoons in honor of our friend – whom we love so much – so he can always have a spoon to dig, but we always get to eat).

So – Camp is packed up by 1ish – ready to store again – and mom feels like she went through the wringer, boys thought they were in heaven with all of the activities and kids, tummies are full, and memories are full.  A less than one day camping trip?  It was worth it.