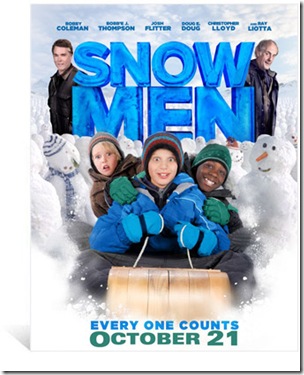 Claimed to be the “The Family Movie Event of the Year,” I was asked to pre-view SnowMen in hopes that I would share it with you!  My hubby and I curled up in front  of the PC Monitor last evening and really enjoyed it.  There was a strange string of mentions to what happens when you die, how you get to heaven, and the assumption that you would see heaven if you were dead and then return to talk about it.  I’ll lay it out there – the Bible is clear – “Believe in the Name of the Lord Jesus Christ and You WILL be saved!” Acts 16:31 “For God so loved the world, that he gave his only Son, that whoever believes in him should not perish but have eternal life.”
(John 3:16 ESV).  The boys chatted about it, thought their mom thought there was something specifically more than being “good” to get to heaven, but the conversation stopped.  I hope it opens conversation in your home, that through Christ, and your denominational /cultural beliefs – may be able to reason what you believe to be true in your home, as it lines up with Scriptures.

From the Film Makers – SNOWMEN is a humorous and heartfelt coming-of-age story about three unlikely heroes and the winter that changed their lives forever. After a surprising discovery in the snow catapults three small-town boys into the spotlight, the best friends hatch a plan to be remembered forever by setting a Guinness World Records®title. Along the way, the trio battles schoolyard bullies, unites their community and discovers that – while fame may be fleeting – true friendship lasts forever. The film stars Bobby Coleman (Last Song), Ray Liotta (Wild Hogs), Bobb’e J. Thompson (Role Models), Josh Flitter (Ace Ventura Jr) and Christopher Lloyd (Back to the Future).

Snowmen is a true story, but all the facts have been changed.

The finished film, which celebrates what matters most in life, began as the most depressing script ever. The first draft, written a decade ago, read like a tragic memoir of growing up on the Canadian prairies. Childhood highlights included my father’s battle with leukemia and the loss of our Jamaican neighbors’ son, Howard.

That grim story seemed like an injustice. I realized those childhood tragedies drew my family and community closer together, and I was inspired to ask profound questions about my purpose in life. I think many children and adults struggle with wanting to matter, and I wanted to make a movie for them that reflected the hope I found as a child.

I rewrote the script.

This time, I wanted to show the innate ability of children to find joy in all circumstances. I considered the people and events that most inspired me, then rearranged, combined, and tweaked those memories to guarantee a happy ending. Events are presented as they seemed to me as a child: dangers exaggerated, victories sweeter, and adventures amplified.

And yet, despite all these radical changes…it feels exactly the way I remember.

Thank you Homeschool.com Product Tester Department for thinking of me as you passed this opportunity around. I was not asked to blog or chat about this promotion, I was freely given a link without contract or payment.  I am glad to promote family friendly movies – and glad to chat it up!

The Transparent Thoughts of an Unschooling Family of Boys - Answering the question - What DO you DO all day?
View all posts by +Angie Wright →
This entry was posted in Movies and tagged Homeschool.com, Review, Snowmen. Bookmark the permalink.