The Voice, Step Into the Story of Scripture

I wish I had a nickel for every time someone asked me what sort of “Bible Curriculum” we use.  I wish I had another nickel for each side look I received when I answered – The Bible.  We like to just read the Bible. Simple. Clean. A proverb a day. We’ve used young reader bibles to read through the bible with each child.

We have used Good News Clubs to go through the bible in 5 years, AWANA to learn key verses of what we believe, but for plain ole “Bible Curriculum”, I still say nothing beats a great read of the cannon itself.

Well.  A few folks thought it could get a little better – Thomas Nelson is publishing a version called : The Voice.  Ecclesia Bible Society has rounded up quite a few artists, musicians, editors, writers and scholars – who approached this in a unique way, different than the professional scholars writing in an academic setting.

When I first heard of The Voice – I gave it my leary protected glance.  I am of the Old King James variety. I learned it as a child, memorized it as a young adult, talked about it with my grandparents, sung the lyrics in church – it is a part of my Christian Tradition. As I’ve grown older, and have a greater understanding of the original texts, my tolerance for other versions has ebbed and flowed – I still have a few versions that I’d kindly ask my friends not to use as their number one study guide. . .but that isn’t the case for The Voice.

My first introduction was through the website. Through the website – they give you MP3’s Videos, Texts, Samples, Explanations – of the how and the why of Stepping into the Story of Scripture.

I then received a free download of the New Testament.  I liked the way it read, but again, I was still leary of changed text.  Saying The Voice instead of The Word? I wasn’t sure how to process that.  I read it for a while until the Free Paper Back edition arrived from Thomas Nelson.  One of the first things that struck me was actually financial.

They give away much of the text on line. Their book is made in an inexpensive way, and is listed at $6.99.  The book came with a flyer to help churches get copies. So far – unlike other specialty versions – this doesn’t appear to be ‘a profit thing’.

With the paperback version, I was able to spend more time in the preface. A 16 page explanation of the heart of the why for The Voice. My ears perked up on page 8 when they explain four objections to a text being either word for word or thought for thought.  One such objection is that every translation is an interpretation – they give the Italian Tradutorre, Traditore – “The translator is a traitor.” “Even if it were deemed useful to design a computer program to translate mechanically the Scriptures into English, human subjectivity and judgment would still come into play in various ways . . .”

I enjoyed and agreed with their objections to it being neither a Word for Word or Thought for Thought, but rather an interpretation.  On page 15,” The Voice Bible represents a new approach to Bible translation, . . . intentionally avoided the tendency to use trendy language. . . .  We stand in gratitude to a multitude of saints who gave their lives to preserve and transmit the Scriptures in their original languages from one generation to the next.”

What really hit me – is their choice of The Voice for Christ. Jesus is refered to hundreds of times as Christos. They explain that Christos is not a name, but a title. A greek translation of the Hebrew Messiah. They choose to use “God’s Anointed, “the Anointed”, or “The Anointed One” instead.

I’m rambling, and being interrupted as I type – You can read parts of the the introduction here: http://www.hearthevoice.com/about-the-translation

What I am wanting to share – is that I received so much encouragement and excitement, just from reading the Preface and Introduction to the WHY of needing to read the Bible – that I’d want to share that passion with you as well.

Step into the Story of Scripture – You don’t need a curriculum or a guide  – you just need scripture. If the Old King James isn’t a part of your family tradition – and you are looking for a version written directly to generations to come – I believe that The Voice is it.

We had a small group bible study – where we each spent time going around the circle reading a chapter of the Bible. We worked through several books of the New Testament. The largest point of contention – was bible version.  You’ve been there – when someone says – My Bible Says This – My Bible is Different – and the conversation gets off of the Actual Word, and onto the versions.  Our group solved this issue by purchasing several New Living Versions, so when we read – we were all reading the same text. We were urged to read at home, study at home, pre-read and be ready at home, but to keep version difference specific conflict out of the evening.  I would recommend, especially at this price, that The Voice would also be a good version for this need. When you want several people to dive into The Word, and Hear His Voice, and not dwell on the translators. The Holy Spirit will reveal truth. The Holy Spirit will reveal if there is a wrong interpretation. Trust Him to direct you while you read. Only through Christ – The Anointed One, and through the Holy Spirit – are we ever given understanding of the Scriptures, real understanding – no matter what version we read.  (Luke 24:45)

Oh – and I know I am going on – but I can’t stop before sharing the introduction to the Book of John. The introduction to the book talks about Who Christ Is. The I AM. Associating Jesus with God’s unspeakable name. In John 1:18 he calls Jesus The Logos, The Voice, the preexists with God, is the agent of creation, and is made flesh for the world’s salvation. “Only John’s Gospel names Jesus as the Logos and declares that he existed long before time was measured. This Greek word carries variety of meanings, all relating to the act of speaking. It could be translated “word,” a thought that comes tto expression, message, declaration, reason or content of preaching; most are found in various translation. It is clear that Jon means that logos is declared to all creation.” The following paragraphs talk of why the rendering of The Voice – as Jesus God speaking and revealing Himself to the World – is a different translation than Word. Oh how I wish I could just copy and paste the whole introduction to the Book of John for you to read.

14ish Black Twizzlers, several interruptions, and a cup of Chai Latte later  – how does one review “the Bible” for another. My urging, is for my very conservative friends to not judge this work based on their desire to not have another interpretation on the market – and for my very liberal friends, to choose to read the Word for themselves, and my hope for all of my friends, no matter their label  or version preference – to Just Read It. Without it being read, they are but mere print on a page, it can not become active and alive until it moves from the shelf and into your heart. 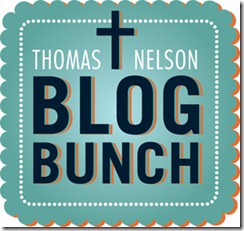 I received a free copy of The Voice as a giveaway from The Blog Bunch.

The Transparent Thoughts of an Unschooling Family of Boys - Answering the question - What DO you DO all day?
View all posts by +Angie Wright →
This entry was posted in Book Reviews, Reviews and tagged Bible, HomeSchool, thevoice, ThomasNelson, Voice. Bookmark the permalink.