The season came to a halting close yesterday afternoon – after a hard fought 2nd place at the “World Series”. We had won our two games on Saturday, and then replayed one team on Sunday – and they won with 3 to 2. Although it was disappointing, it can not erase the joy from the entire season of being a winning – learning – growing team.

I didn’t realize how little Jon knew about baseball until our first game. Not to mention myself – I spent the first few weeks in the stands with the moms asking – Why? How come? What just happened? We spent a lot of time on YouTube, watching MLB games on TV, laughing at baseball movies on Netflix, and watching many a game at the fields.

By the end of the season, Jon was in great physical and mental form. The joy of the game was there when he didn’t have to “think” about all of the rules. Just Play Ball.

The boys learned a lot about being in this micro city that would be created week after week. Three fields, toddlers to teens, 20 families per field with grandparents and friends, 2 concession stands and a near by skate park. Makes for a crazy environment. It was fun to hear their tales on the way home of what happened, what was said, who they helped, what they wish they’d done differently, and their triumphs.  I loved hearing the surprised exclamations of “They Homeschool?”, or “This is Jon’s First Year?” . It made me wonder what they thought of homeschoolers by their crazy reactions of disbelief, I only asked one mom, and then regretted the answers, so I didn’t let my curiosity spark any more conversations.  It was a new experience for me to spend that many weeks elbow to elbow with great families that were all entirely different, and yet entirely similar, at the same time. Hard to describe. All in all, all the fears that I had about playing sports, were both dispelled and confirmed – with maturity, communication, boundaries and prayer – we came out just fine! 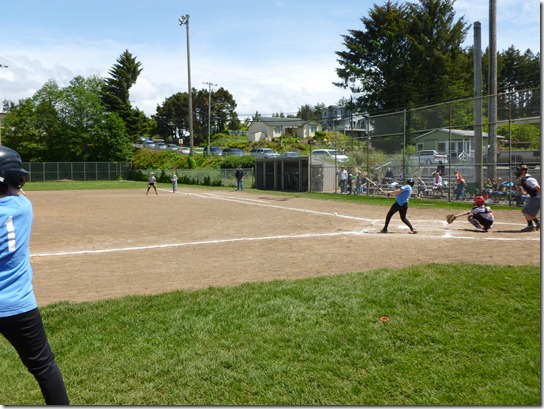 We we do it again? Oh Ya. We’d sign up for the next round of ball tomorrow.  In the photo above, you may see the ball hovering over the right field  line. Jon was getting pretty consistent in his hitting, with some more practice, he’s going to be awesome next year.

The Transparent Thoughts of an Unschooling Family of Boys - Answering the question - What DO you DO all day?
View all posts by +Angie Wright →
This entry was posted in Some Schooling and tagged Baseball, HomeSchool, Homeschooling, hsbloggers, Lincoln City, Majors, Oregon. Bookmark the permalink.