Friday’s assignment for Nature Study:
Find a sample of each of the three types of Rocks to start a collection.

What are the three types of rocks?  For each type, describe how they could be formed and give an example of a type of rock that falls under each type.

My oldest son went immediately to the internet, my youngest son went to the Science Encyclopedia and Dictionaries.

They quickly found the three types and familiarized themselves with the ‘how’ – but had a harder time with examples.

We took a short walk to the spring fed brook next door in the forest.  We’ve see the beginnings of this spring further to the east in the hillside. The rocks there are soft, yet jagged. As the winter storms surge, pieces of the layers of rocks detach and start their journey to the lake. By the time they have reached us, a mile or so away, they are soft, flat, round tiny pebbles. Very soft. Their clay and sediment rub off on your skin and clothing. You can fold them in your fingers like clay. A simple available example of sedimentary rock, and a visual of Sediment – Formed – Rock.

Next we walked to the front of the house, where we have quite  a large outdoor rock collection in a section of the flower garden. There, we have a piece of Obsidian, dug up from a field on our property in Central Oregon. This is an easier example, after living in the middle of so many lava flows. Obsidian, glass, pumice, and rough lava rock are abundant.  We had a longer conversation than I expected about the word Ignite. Ignition was easily related to the key starting the car engine, but had not been translated to a word used for fire, heat, combustion. Igniting a Firework. Trying to separate words to describe how to make logs hot and burn – the initial process – using a match and maybe boy scout water – to ignite the logs and debris. Fire. Heat. Igneous – A fun chat of rocks formed by Fie-yah (correct pronunciation when you have middle school boys).

The next area – had us all stumped. I was starting to feel a little ignorant. Morph. Transform. What rock in our collection started as one mineral and became something else? Agates? Would they start as minerals and then cool or collect and harden to become Jasper, Opal, and others? Well. No. Still the same mineral – and placed under Sedimentary Rocks – layer by layer. hmmm. We brought a few rocks that we thought morphed, and headed to our local rock shop : Rock Your World, Pacific NW Gem and Art Gallery.

Great shop, reasonable prices. She had small enough samples to help any income level fill in their collection. This has been a hard part for us, since we are able to travel to sites to collect specimens, it is hard to pay $10+ dollars just to add an oversized polished piece to our shelf. They had MANY samples – down to the wee tiny size – rough cut and polished. Perfect!

She showed us on the map where the Metamorphic Rock Samples could be found in nature in Oregon.  Big gapping whole?  Central Oregon Coast. . . . and Central Oregon. I felt so wonderful finding that out. A wee bit to the east of Central Oregon, and a wee bit to the south of us – and we’d have many samples. She found a small piece of Serpentine rock along with a small sample of Jade for our collection. Then showed us several examples of serpentine and jade describing how it forms. Best I can re-describe is Taffy. The serpentine moves, shifts, bends over on itself – and then as pressure pushes it down, it becomes Jade. With several samples of the various stages, it was easy to see. Maybe I was just craving the Taffy from down the street, but the visual was easy to see. Metamorphic Rock – Jade from folded Serpentine – folded, bent, and then compacted by pressure.

What about Agate? Igneous because heat melts the minerals and then they are deposited into pockets and cooled? Metamorphic because the mineral can cool into various types of gems? Scientists say Sedimentary. That there is enough evidence that the minerals could wash into the pockets, layer by layer, creating the agate. Above our teacher is holding a pocket of rock cut in half. Below you can see the layers.  The large specimen on the table shows a rock with an agate in matrix.

The two owners of the shop spent patient time helping us to identify a few rocks collected on the beach that day. They have a nice sign in the window letting walkers know to bring their beach finds to them for identification in Lincoln City.

She bagged up our finds. Mine the serpentine, Jon’s the Jelly Bean Jasper, Nate’s Emerald Creek Idaho Almandine Red-Purple (tiny pkt), A dollar’s worth of Lava Rock, a Petrified Shark tooth for fun, a Chalcedony Rose for me, and a kryptonite, er, Kyanite Crystal for Nate.  I also picked up a dollars worth of Sunstone Crystals, the Oregon State Rock. 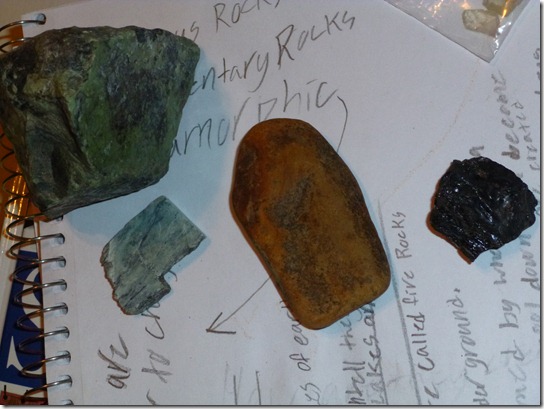 We came home and were able to separate our finds by Rock Type. With the new microscope we picked up, the whole family spent over an hour re-examining the agates from Thursday’s walk. The folks at Rock Your World printed out a receipt of our new times for us so we could remember. If you are driving down 101 through Lincoln City – they are worth a stop for sure. Better yet, give us a call and we’ll give you a tour.

Our rock collection has grown over the last 15 + years. However, if you have little ones or would like to start fresh – Middle Girl from Hodgepodge shares a simple inexpensive idea to start over at Handbook of Nature Study this week!

(Disclaimer: For how Rocks are Created – We are a Creation/7 Day Bible Believing Family. We always leave room for – “Hmmm. Maybe God Created that huge chunk of Obsidian and plopped it right where He knew you were going to dig, so that you could find it there.” In Genesis, In the Beginning, During the creation of the mountains, described in Job and in Psalms among other places, during the flood, during the days of Peleg, there are many places where shifting, pressure, heat, water, quick changes could have formed many of the pebbles we find on the beach today. We live on the ocean near a line of active volcano cascaded mountains. We also find specimens that originate from Colorado. Interesting. A blend of looking at scientific observations of how something could come to be (Jade), and mixing that with the knowledge that God created Whole Items. The Redwood Tree. The granite Wall. the Sand on the Beach. We do not spend time to reason how 50 billion years of ocean tides formed every agate we pick up on the beach. Maybe God Created it that way.)

The Transparent Thoughts of an Unschooling Family of Boys - Answering the question - What DO you DO all day?
View all posts by +Angie Wright →
This entry was posted in Beach Schooling, Outoor Hour Challenge, Some Schooling and tagged Beach, free, Friendly, Gems, harmonyartmom, HomeSchool, HSBlogger, Identification, Inexpensive, Lincoln City, Oregon, Outdoorhourchallenge, Rocks. Bookmark the permalink.

4 Responses to Rocks–Collecting by Type