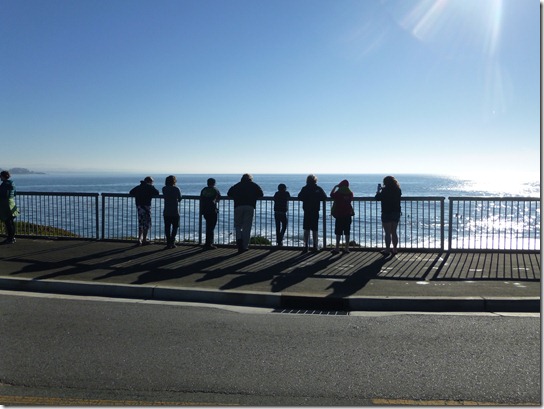 It has been a week. A week since we spent all day standing next to this fence with hundreds of other people shouting and cheering and snapping photos.

The Volcom youth surfing competition at The Lane in Santa Cruz, California.

Leaving town before 5 a.m., traveling down Hwy 101 along the coast was amazing. The Pacific Ocean to our left and beautiful mountains to the right. Cute tiny little towns nestled between twisting highway every 20-30 miles along the way. We had to stop often to scope out future surf sites.  I lost my photos – they got downloaded and erased on accident to another computer. But it was – Glorious. We got to stop in Eureka and surprise my 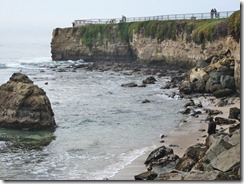 brother and sister in law, a completely last minute decision.  They too live right on the water so lunch was fun! We continued on to San Francisco, looping a bit in the dark for the kids to see the bridge and a bit of Lombard Street. Then it was all systems go to Santa Cruz.  We headed straight out to The Lane – and listened to the surf, trying to see the swells come in.  On to the Motel checking in a little after 10 p.m. 4 Surf Team members and 3 coaches in the van, 16 hours of surfing videos, and tons of laughter and the occasional cheese bit fight.

In the morning, it was back to the Lane where we joined up with 3 more coaches and another Surf Team Member. They had drove through the night after work and jumped in the water around 7 a.m.  Crazy!  After looking at the swells, they hurried to suit up/gear up and jump in! 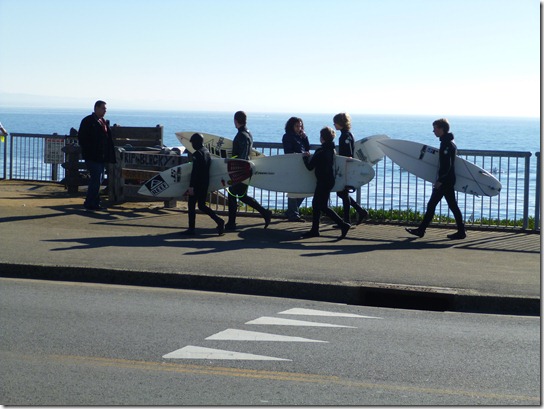 The waves here are vastly different.  The swells, on this day, are very long and really far apart. You could have over 20 people in line waiting to get on the next swell. Several catching it.  People were in much thinner gear than our 5/4.  Hoodies were optional. It was a photographer’s paradise.  I think I went through about 600 on Friday. 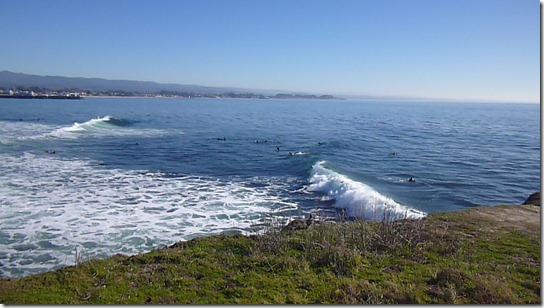 Our team paddling out.Jon is the outside in a hoodie. 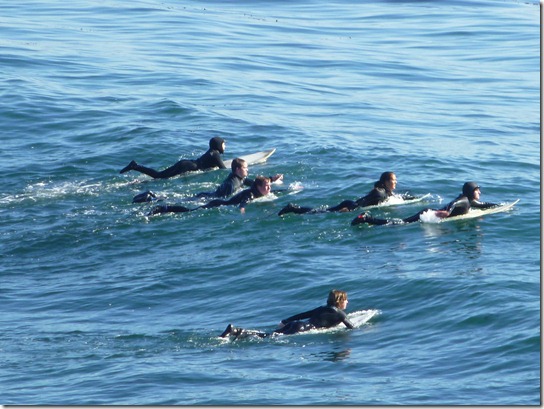 Saturday morning, the boys had the van re-loaded and breakfast made by 5:40 in the morning. We were told to be out at 6 a.m. or risk not getting a spot on the line up. At 7 a.m. Volcom started asking for registration forms and it was  frenzy of soccer  surf mom’s shoving papers at them. Our Team all got a slot. Jon was in the first heat of the day with the Groms, ages 11-13.  He was pretty nervous.

Chatting with the other moms in the wee hours of the morning made me feel really uncomfortable.  This competition is one of the last of the season, and many of them travel from spot to spot participating in them all. Many carried on about how their ‘pro surfing son’ was expecting to place and move on to the Nationals.  We met the dad of a kid who was “First in the State of California for Squids” (Squids is 10 and under) and he was participating.  Was there any kids there just to participate and have a great time?

That’s when I met Heather – another mom of ‘just a surf crazy kid’ who wanted to participate. She had a Squid. We kept each other company and kept each other mostly sane throughout the morning. 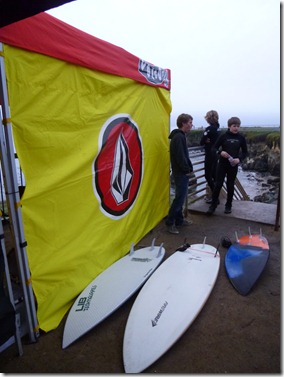 Wait for your time, 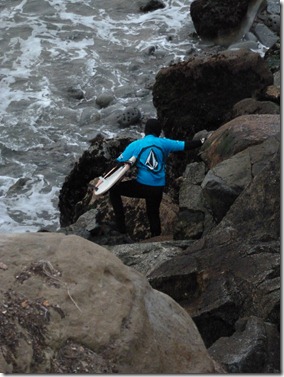 Climb down the stairs and out over the rip rap, 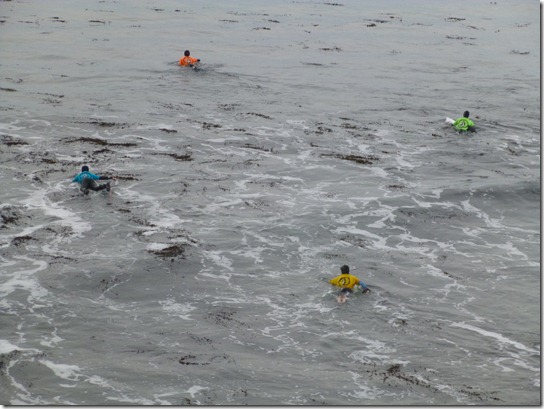 Paddle out to the swells,

Take a couple of fun waves, 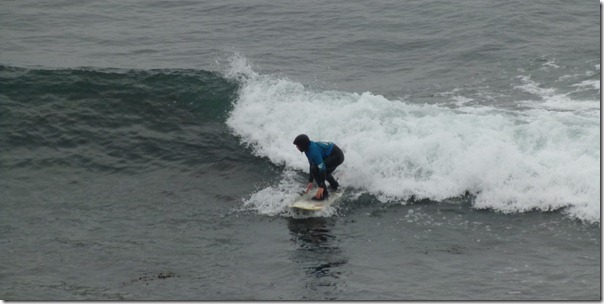 Try to forget how many people are watching, 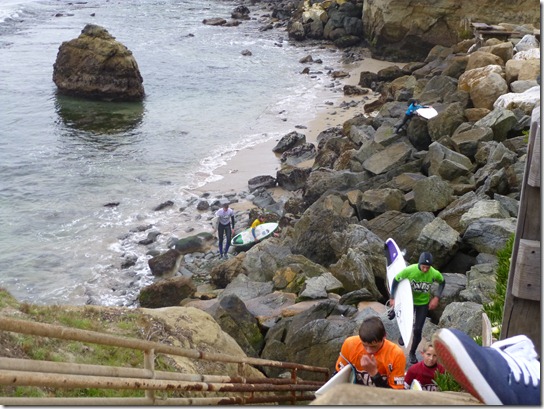 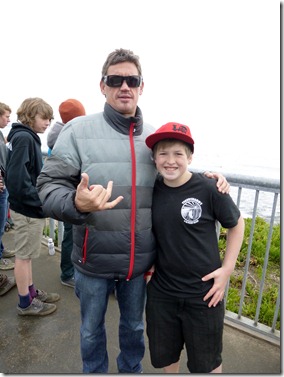 Spend the rest of the day meeting the coolest surfers ever, like Big Wave Surfing Champion  Darryl “Flea” Virostiko . He had a great time chatting it up with the other groms as well. 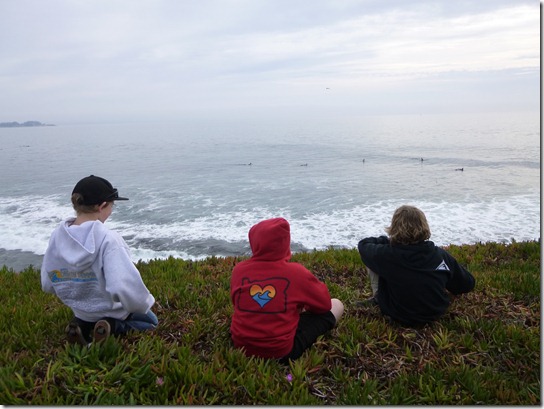 Many hours were spent on this cliff watching the other heats. (Jon in red) 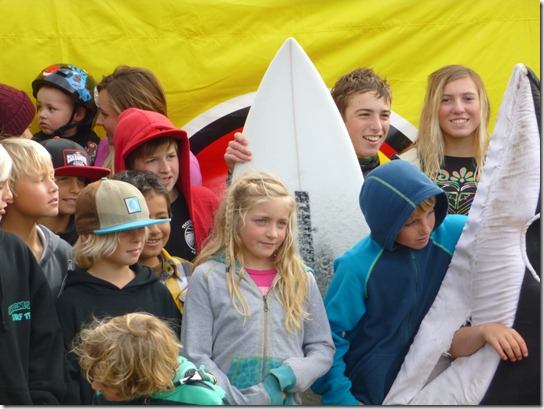 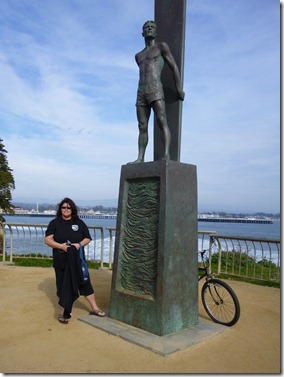 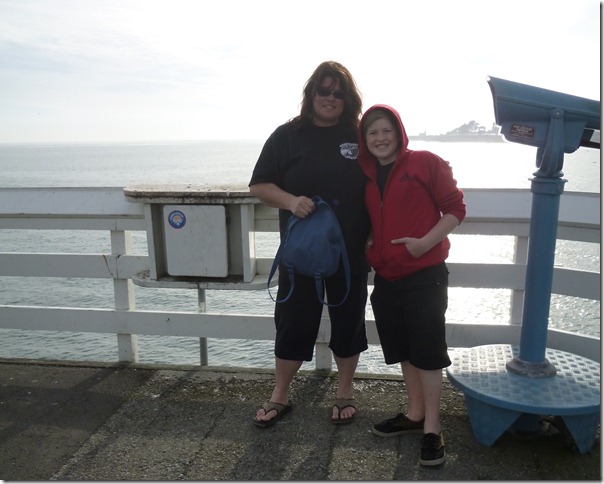 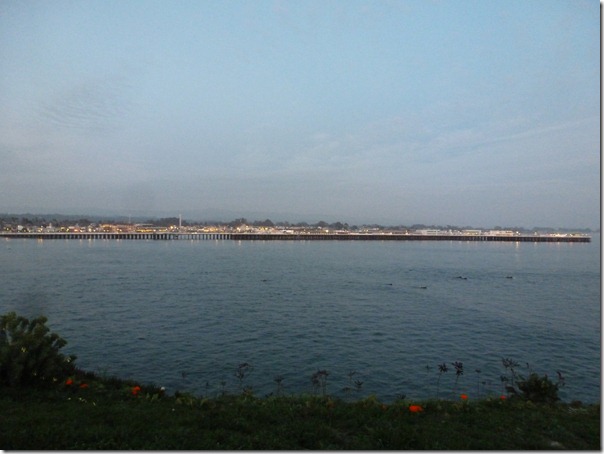 And surfed until dark Friday and Saturday. 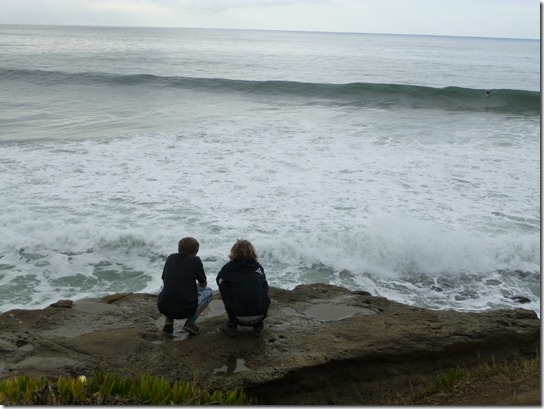 I got to see the joy and passion of that lil guy on the left there. Un inhibited. Surrounded by so many who live the life of pro surfing. For Jon – he’s been surfing seriously since June. A couple of lessons the summer before. He came in 2nd in Beginners at Otter Rock in June, and 3rd in Groms at the Longboard Competition –but those were nothing like we saw this weekend. These kids were wild. We’ve never had to share waves, so we were not used to the line up rules at all. In the ocean by ourselves – our kids rip it.  By Sunday – they were really getting the hang of it. We surfed until 3 in the afternoon – and then drove straight up I-5.

This past 6 months, I have spent a bit of time talking to Jon. Talking him down with his surf excitement. Trying to find the line between passion and humility. After being around this crowd, I realized he could have passion and humility – but that joy and enthusiasm were not bad things. He’s already been out to swim train twice this week. Talked to everyone in town about the trip. Walked miles on the beach pointing out lefts and rights and beach breaks. Even went out this morning and met a few Big Wave Surfers on the beach while they checked out the waves.

Yep. I think you’ll be hearing a lot more about our surfing adventures.  This lil grom is going to impress your socks off this summer!

The Transparent Thoughts of an Unschooling Family of Boys - Answering the question - What DO you DO all day?
View all posts by +Angie Wright →
This entry was posted in Beach Schooling and tagged feb 2, Groms, HomeSchool, HSBlogger, Oregon, Pacific Northwest, santa cruz, surfing, the lane, volcom. Bookmark the permalink.