Wind at the Beach

Have you heard about MagicSeaWeed? (MSW) We were introduced to the MagicSeaWeed site through the Oregon Surf Shop and our Tigersharks Surf Club. It is a tool based on buoys that tell us what sort of swell is in the water.  Our club is set up so that the members are to be aware of the surf conditions – so that when a swell height is in their training range, they can call an instructor and ask them to go surfing. 4-6 or under is usually what Jon is looking for (Head High for him).

We have been tracking the storm swells so that we can be there when the big wave surfers are in town at Nelscott Reef. Usually when you see a wind pattern come through, it is with a storm, and the storm surge creates the swell in the ocean. There is a column below that says how many seconds the swells are apart.  That tells us how strong the core of the swell will be, how long it has been traveling, how safe it is for an 11/12 year old first year boy to be playing in. 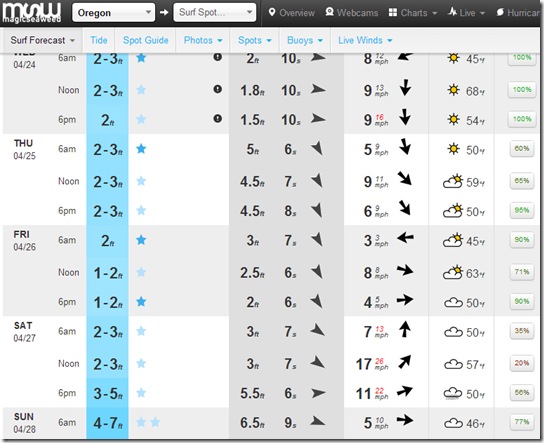 But this week it all changed.

We are heading into a week of warm weather on the Central Oregon Coast.  Blue Sky. No Storm. No rain or mist. I wanted to schedule a group Stand Up Paddle (SUP) time on the lake.  If people bring Kayaks or Canoes, the wind can be an issue, and it is just a lot more fun to know if you paddle from our house south, or Regatta north to be in a downwinder, (Wind on your back) instead of an upwinder (Crazy strong wind trying to keep you from going forward).

As I look at MSW, I see that the ocean is flattening out with the lack of any storm surges. 1-2 foot waves in the ocean is basically like Lake Pacific. However, the nicer the days get, the stronger the winds.  See how on Saturday they predict a 26 MPH wind? Why? There isn’t any storm, the waves are not getting bigger?

I have researched Advection Fog on the blog in July of 2010 and know that the hot air coming over the cold ocean creates a fog that also has ocean breezes.  It can be clear and hot (upper 80’s) on my deck a mile or so onshore and be cold (55 and under) and windy enough to knock over a child on the beach with visibility of only a few feet from the dense fog. What we were not looking at in 2010, or concerned about – was the wind.

(Link to graphic of Convection Wind) – I talked to the founder of our Tigersharks Surf Club about it on Sunday.  He gives the Ocean Education Classes for KLG Adventures and for our Club.  He explained that it was Convection Winds.  (You have to love a guy that will stop and give an impromptu Ocean Education class after almost 4 hours in the ocean surfing.)  The hot land makes the air rise, and the cold ocean makes the air cool. It creates the Convection Fog. It feels as if the wind is racing up and down the coast. On this particular week it is fighting between the inland heat and the ocean cold. Other times it races between the Canada Cold and California Hot. It is localized to the beach and about a mile onshore at best.

Right now, it is extreme, and very localized, since the water is still really cold, and the land is getting really toasty. In our research this week – this led us to another new term:  Spring Transition. NOAA says that in the winter the winds push onshore causing a downwelling.  During the spring, it shifts to northly winds, which creates an upwelling. When we looked at MSW this week, we noticed that the direction of the arrows had changed as well. NOAA calculates the Spring Transition to be on a given day, or time period marked by the temperature of the water at a specific buoy station. I called and emailed to ask if it had officially started (between March and June each year), but have not received information back yet. They are working on it for me.

What does this mean to us? Why is it important?  Well, thinking you can go out on the water in any craft on a sunny day and have it look like one of those movies from the islands is expecting too much. I’ve been caught several times in the lake and in the bay in a craft that was hard to navigate due to the winds. My son has been asking to go out Ocean Fishing with a friend in a small craft, and winds would need to be considered. 28 MPH winds can knock over the kayaks and make my canoe go in circles.

We’ve had conversations with many guests, even yesterday, telling them about a spot on the lake that gets crazy wind gusts. You can’t see it from our house, you don’t experience it til you turn around the bend, and it hits you full in the face coming north from D River, and by then you are flipped off of your board.

This summer, thanks to our Ocean Education classes and MSW, I don’t think we will be caught completely unaware. When we have guests over and we drive over to the beach to ‘see if it is nice there’ we’ll have another measure of knowing if the parka’s should be packed, or at least the swim gear changed to sweats.

I’ll share more about Spring Transition when I hear back from NOAA. I’m a happy little camper to see the change on MSW, and have the resources to help me figure it out!

The Transparent Thoughts of an Unschooling Family of Boys - Answering the question - What DO you DO all day?
View all posts by +Angie Wright →
This entry was posted in Beach Schooling and tagged convection wind, HSBlogger, Nature, Science. Bookmark the permalink.

1 Response to Wind at the Beach