Jon ended up going on out his Russo board on Christmas day. However, he had a crash on his bike that ended with him smashing his ribs on the frame. He said that he couldn’t lay down on the board without his lungs killing him and gasping for breath. We found him on the beach dry heaving into the sand. No Buenos.

This is when we paid a bit more attention to his ‘owies’ from the bike accident. We found that two of his ribs were quite swollen and protruding. He had to get on the phone to confirm with a few friends that he did in fact have a real injury. Boys are weird. 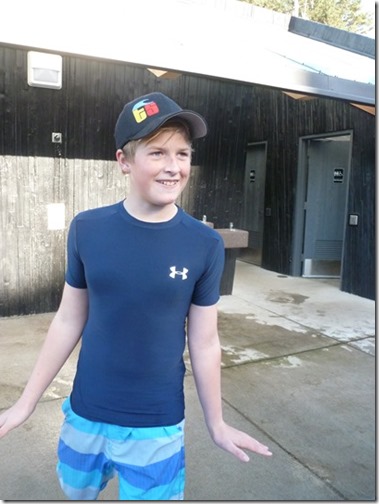 I’ll spare you the topless version – but this is how excited he is about the little spot that is protruding near his left elbow.

Christmas morning we got a phone call that Hubby’s mama had surprised us and made the drive up from Austin, Texas! She brought Papa John with her, who hates to fly, so the boys were super excited. When she reached us on the 26th we were in full tourist mode. We met them at Beverly Beach.

Showed them the Devils Punchbowl and Cape Fowlweather which, thankfully, did not own up to its name.

Max and I showed them Fogarty Beach with tons of fossils, agates and low tide wonders. 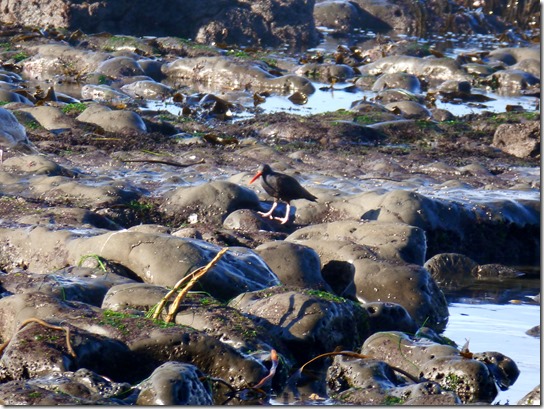 Oyster Catchers were yelling at the gulls.

There were dozens of Giant Pacific Chiton: Cryptochiton stelleri . You can see why they call them gumboot chiton, as they have a large foot that attaches to the rock to gather algea and food as the grazer of the tidal beds. This one is also called a red-brick chiton due to the color. 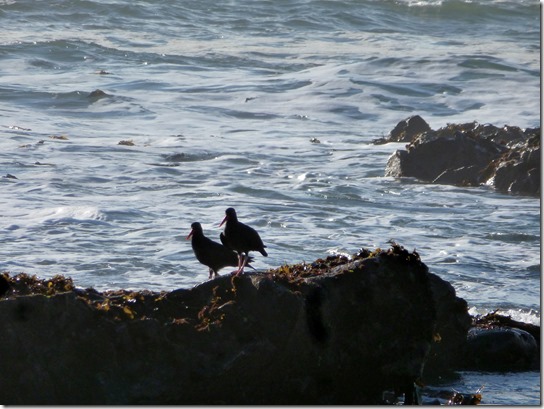 Papa John loves beaching combing and finding interesting objects. The boys have been waiting a long time to take him to our favorite spots. 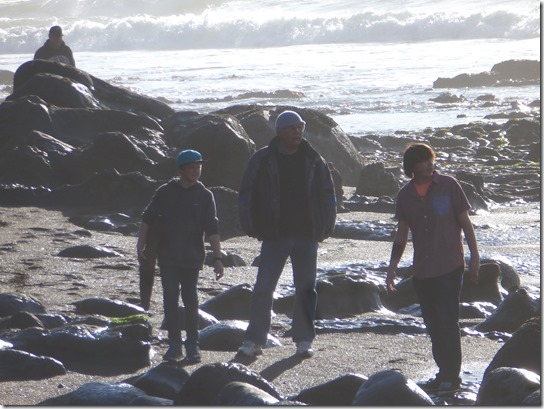 This is always where it does a mama’s heart good to hear how much information the boys have kept with their passion for the ocean shores. On and on they went with details of what they found. Papa John’s Gulf Coast is quite different than our ever changing huge tides of the Pacific Northwest.

Observing areas over and over is great to know when something is ordinary – or extraordinary. Finding this Sunflower Sea Star – Pycnopodia helianthoides created much excitement. These can have an average of 18-20 arms. 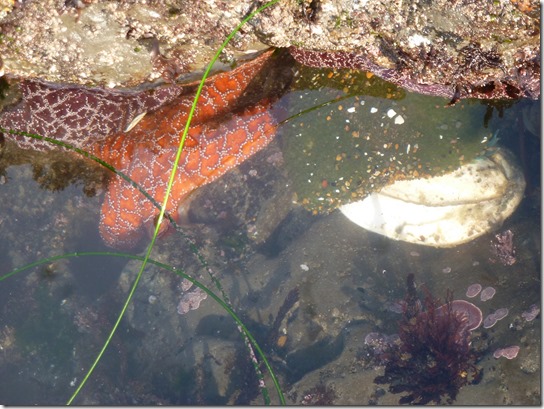 More shouts were heard when they found a sea star eating one of the many Gumfoot Chitons.

My favorite thing to watch – my Nate. 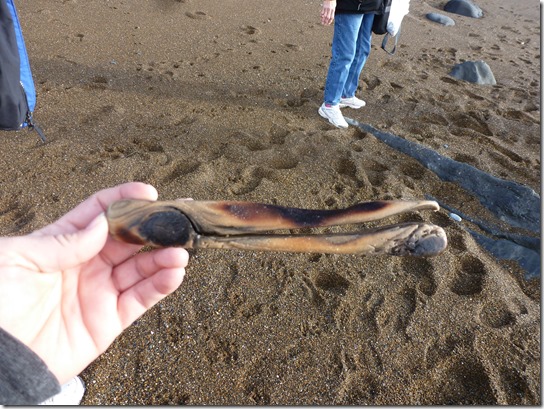 Jon found a piece of driftwood shaped like a pelican. The jaw moves. Pretty cool. 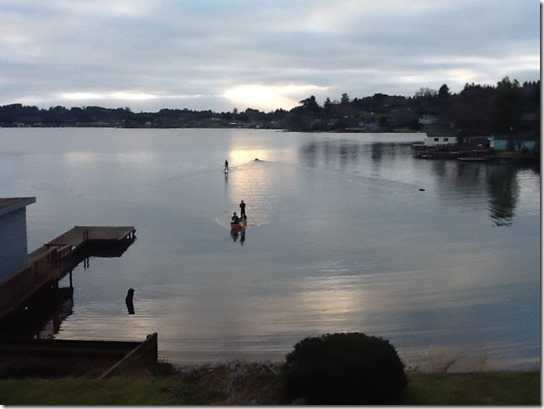 We came home to some Surf Team practice on the lake. The boys prone paddle for 500 strokes, 100 at a time, across the lake and back. Cousins were in the canoe, I was on the SUP, the boys had a lay down prone paddle board along with their surf boards. 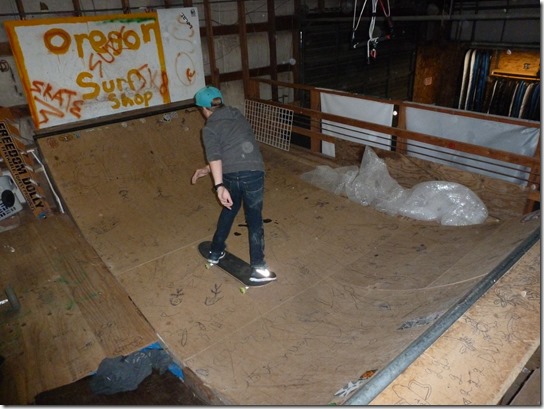 The boys wanted to show mimi their favorite part of the Surf Shop – the little skate board park, decorated by the little tiny Squids (youngest lil surfers).  Jon has been practicing 180’s and more skills in dropping in.

Are you still with me? I thought of breaking up the week into daily posts. . . .

Food. Have I mentioned that we eat A LOT of food when mama is around?  I’ll spare you a list of the indulgences, save for our favorite, our Oyster Sandwich. 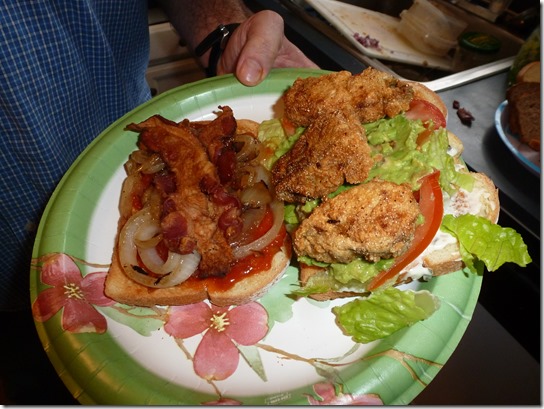 I had mine in a low carb wrap. So fantastic. We were surprised with a visit from a traveling friend from Bend during dinner – and enjoyed our sandwich on the deck catching up.

Then off to the Oregon Ducks vs Texas Longhorn game. It was fun to see the two die hard Longhorn fans in a pub full of Ducks.  We opted to go to a Video/Family Pizza/Pub spot since we don’t have cable at home. 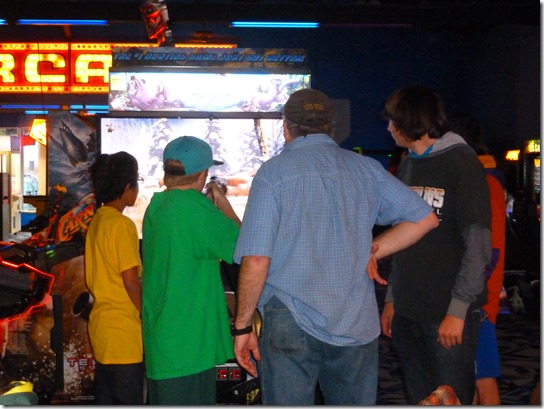 During our out and abouts Mama wanted to watch the glass floats be blown at our local shop. We were able to watch a bowl be created. 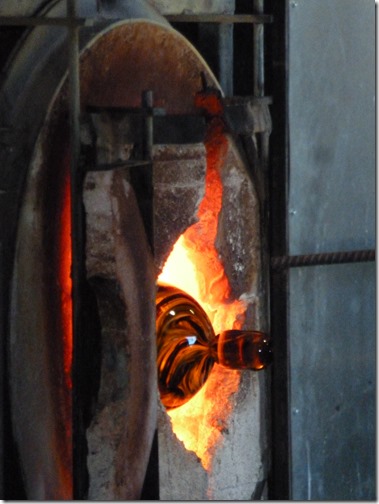 Starts as a glass ball, then the top gets heated and pricked and then spun out. 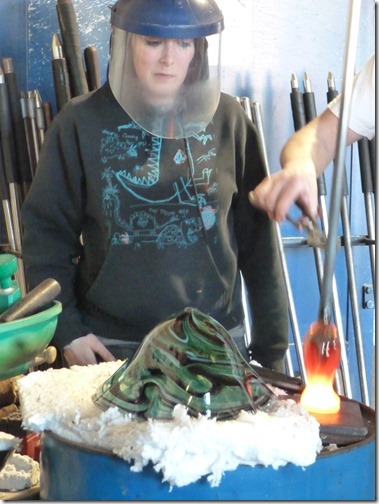 We spent quite a few hours on the beach Saturday and Sunday. Didn’t find any floats this trip – but saw quite a few out and about. I think you have to keep your eyes on more than the agate beds. Ha! 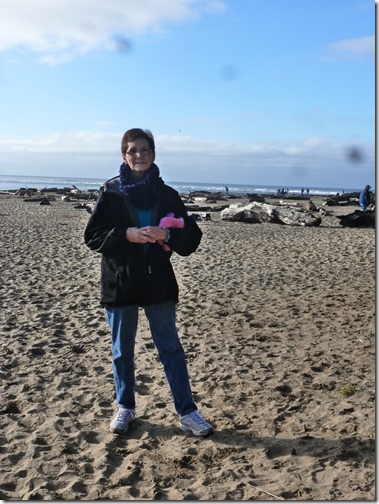 Then we remembered that Jon has a blow your own glass float certificate from his birthday – so we headed to Newport to blow his. A full blown (no pun intended) post will be created today after we pick up his float from the gallery. 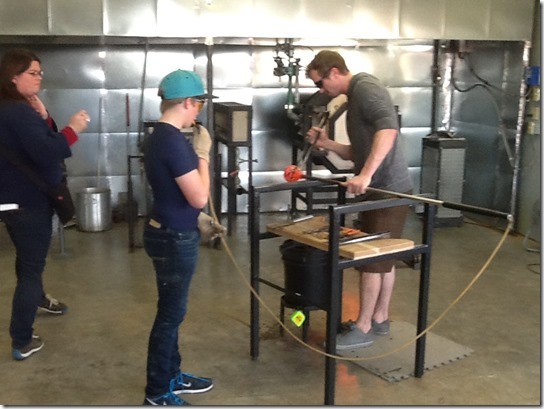 More swimming and jumping off the dock on New Year’s Eve.

Wow. What a week from Christmas to New Years. Yesterday we traveled to Portland to pick up hubby’s new hearing aids. I’ll probably have a post about that too in the next week. Today is a trip to Newport to pick up Jon’s float and meet up with some friends. So far – no plans for Saturday/Sunday save for getting the classroom back up and ready, the workboxes refilled, the task lists made for the next couple of weeks and gearing up for a 10 day surf trip in January to California for two Vulcom Competitions. Whew. I’ve had a few naps the last two days! Ready for vacation to be over so we can rest!

The Transparent Thoughts of an Unschooling Family of Boys - Answering the question - What DO you DO all day?
View all posts by +Angie Wright →
This entry was posted in Beach Schooling, Lake Schooling and tagged HomeSchool, HSBlogger. Bookmark the permalink.

2 Responses to Christmas Vacation? Bring it on Tourist Style!