The Boat Parade on July 5th was pretty cool, until it started going faster, and faster, with more and more boats, with bigger wakes. Well, that was still pretty exciting to watch from the deck. Not sure the parade should have been going so fast! ha.

The waves got pretty large. The waves out in the circle there were incredible. Like playing whirlpool in the bathtub or a small pool. Nothing like over 30 boats chasing each other in circles on the lake to make for a good time.

After the parade waves calmed down we went to go paddle to see the fireworks that were being launched on the other side of the lake. 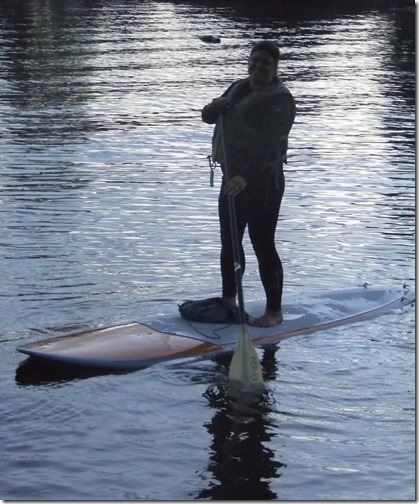 See the floating island in the lake? These were all over. Nice.

The lake sheriff drove by and told us we really shouldn’t be on the other side of the lake. Found out the next day how much chaos was created with the boat regatta while waiting 2 hours for fireworks. Craziest day on the lake since we’ve been here for the past 5 years. We turned around and had a really great time playing in the water til after dark, enjoying a fire, and lighting off a few fireworks on our end of the lake.

The 4th landing on a weekend sure increases the visitors on the lake!!! Still not sure how I feel about being invaded for the weekend. The lake, she’s tough, she can take it.

The Transparent Thoughts of an Unschooling Family of Boys - Answering the question - What DO you DO all day?
View all posts by +Angie Wright →
This entry was posted in Lake Schooling and tagged Devils Lake, HSBlogger, july 5, Regatta. Bookmark the permalink.