We have been thinking, sorting, moaning, praying, considering, worrying – about when and where to start College this past summer since he was five. I’ve asked those who have gone before. I’ve listened to those who waited and those who went early. To those who went into full four year colleges in dorms or apartments, to those who went the community college route first. Trade Schools, On the Job Trainers, Internships, and just plain ol fashioned good workers.

One thing that became sure – was to really be tuned into to the goals of each individual student, their path, their desires – and create an education that leads them to those goals. Adjust often when necessary. We’ve also done this since they were 2 and 5 years old.

On Nate’s path – we were thinking either a higher biology class or Anatomy class. I was given the DVD set of Anatomy from Apologia. It is . . . pretty intense. I ordered some books, read through the Apologia texts . . and was well. Overwhelmed. I went to the community college and looked at their Anatomy Classes. If he is going to work this hard, maybe a dual enrollment option might be good – to have a credited class for all the hard work.

However, the class, the time, the funding – all did not quite line up with his goals. But while looking at that, I saw a Biology course in the afternoon, taught by a friend of mine, that would fit. One of the colleges we talked to last summer said they’d like to see him take a college level biology course before starting their program. Well. There ya go.

We contacted the college about the Expanded Options program (Dual Enrollment). I talked to a friend in another school district in Oregon in August and she was surprised that Nate wasn’t taking all of his classes through Expanded Options this year. Why was he still taking high school level classes? We had a long weekend of her pumping me up, and I approached our local resources to find out.

Take the entrance test – pass – enroll. That sounds easy – but Nate is not your sure shot of a good test taker. Quite possibly the opposite. ha.  And he was dragging his feet and making excuses for taking the placement test. So I let it go. I’m not going to push – maybe next year. 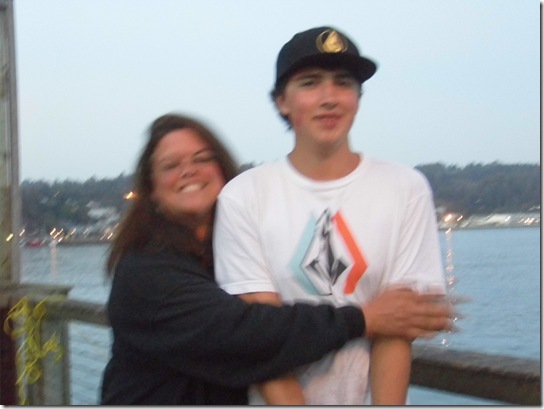 All of a sudden, he drops by the college, gets on the waiting list for the test, which happens to be the next morning, shows up early, gets into the testing – and comes out at noon with big sheepish smiles. He passed all the sections with flying colors! No practice, no getting ready, just a less than 24 hour turnaround.

So we went to our local counselor to find out what this could mean. She, knowing Nate quite well – small town and all – recommended he take a once a week Speech Class and the afternoon Biology Class. There are less than 10 kids in a class, and several are his friends from town.

So – Starting next week – fully enrolled and books in hand this week – Nate’s a three way learner.

and a College Student at Oregon Coast Community College in Lincoln City – Speech and Biology.

As his interests are more direct, we’ll continue to see what courses are good for his goals. The advice we are being given is to have him fully enrolled in the Winter Term, all College Classes. We’ll see. I am thankful to have this in our tiny community, with professors that I know, with counselors that are my friends, with students that are Nate’s friends, and classes that meet his scheduling needs. It’s a Win. Win.

(Nate is 16, doing Junior Level work at home, enrolled with the Lane Benton Lincoln County Homeschool District as a 10th grader this year, but now fully moved to a Junior at Taft High)

The Transparent Thoughts of an Unschooling Family of Boys - Answering the question - What DO you DO all day?
View all posts by +Angie Wright →
This entry was posted in Learnin' Thoughts, My Journey, Some Schooling and tagged act, compass test, dual enrollment, High School, Home School, HSBlogger, transcripts, transition to college. Bookmark the permalink.