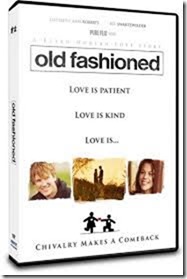 “A romantic-drama, OLD FASHIONED centers on Clay Walsh, a former frat boy who gives up his reckless carousing and now runs an antique shop in a small Midwestern college town. There, he has become notorious for his lofty and outdated theories on love and romance as well as for his devout belief in God. When Amber Hewson, a free-spirited young woman with a restless soul, drifts into the area and rents the apartment above his shop, she finds herself surprisingly drawn to his strong faith and noble ideas, which are new and intriguing to her. And Clay, though he tries to fight and deny it, simply cannot resist being attracted to her spontaneous and passionate embrace of life. Ultimately, Clay must step out from behind his relational theories and Amber must overcome her own fears and deep wounds as the two of them, together, attempt the impossible: an “old-fashioned” and God-honoring courtship in contemporary America.”

Courtship. Dating. Going Out. Together. Not together. In a Relationship. It’s Complicated. – What do all of those phrases even mean anymore?

This movie left me wondering in several places. I thought it would be a good one to have my teen boys watch, but I’m pretty sure they wouldn’t make it through it.

You have a guy who will not come into the apartment he rented to a stranger if she is in it. He is the maintenance guy – so he hands her a blanket and asks her to step outside while he lights the pilot on the stove.

Sometimes I think we hyper sensationalize sexuality – vibes – as if walking into the apartment, as a part of your job, will instantly throw you under the covers. There are lines drawn in the movie of never being alone with the opposite sex. However, the entire rest of the movie they spend getting together, picking each other up, deciding fun things to do, then doing them alone.

He makes a huge stand against dating. But as stated above, they spend the entire movie, picking each other up, going to destinations, doing something fun, spending a lot of time talking, then delivering each other to the door step, that they can’t cross. It’s weird.

One part I do agree with  – is question book. If you flip dating to the other side, the common way you see on Tv Dramas – one would think you see someone across the room, think they are pretty, find out you have chemistry, then fall in love and get married. There isn’t a whole lot said for who the person is, what they think about different topics.

They do talk about God. He believes in God. Cool. She believes in God but not the Bible. Ok. He has all of these theology ideas – but doesn’t believe in going to church. What?

The bottom line is that he has all of these self appointed rules because he was wild in his college years, did things he regrets, and how has established many walls. And the movie shows – the walls keep him alone.

Not sure I recommend this movie. There is a lot of drinking, bars, strippers (they don’t de-clothe), wonky theology, one night stands, pride – and in the end, they go on an official date. Kiss without technically kissing, get engaged, and the idea is that they live happily ever after.

So what is dating? I have a son who likes a girl, but both of them ‘don’t date’. But they spend a lot of time together. But she’s not his girlfriend. Makes me shake my head. Why does it have to be so difficult? Life with intention. Know your limits. Put up hedges to protect you and give you accountability. Protect her reputation, protect your reputation. Watch the Character of both parties.  And don’t get engaged to a person who is not of like faith . . . anyways.  . .

Not a great movie. Sorry.

“Disclosure (in accordance with the FTC’s 16 CFR, Part 255: “Guides Concerning the Use of Endorsements and Testimonials in Advertising”): Many thanks to Propeller Consulting, LLC. Opinions are 100% my own and NOT influenced by monetary compensation. I did receive a sample of the product in exchange for this review and post.

The Transparent Thoughts of an Unschooling Family of Boys - Answering the question - What DO you DO all day?
View all posts by +Angie Wright →
This entry was posted in Movies, Reviews and tagged flyby, oldfashionedmovie. Bookmark the permalink.