I have been pretty excited about the Magnet Study for the Handbook of Nature Study – (Check it out here) . I’ve been checking out Magnet Books, bought the Vanice VanCleave’s Magnet book – looked at magnet kits, and had a huge science experiment ready to go . . . .And then – I read the challenge, and saw that it was a Compass Based challenge.  So we printed out the Notebooking Pages and started out!  This week we have a visiting family joining us, so this week we had six kids from 8-14 to join in.  Fun!

We started with the Compass sheets, and talked about N-S-E-W, and Landmarks. We went outside to find our landmarks for each direction.  It was fun to make sure their landmarks were stationary, not a bicycle or such.

Then we went back inside to play  Scientifically experiment have fun observing magnetism. We each had a container with bb’s, nuts, nails, copper, aluminum pellets and match sticks. It was fun to see how the kids reacted to the magnetism. Once they found out that distance could be a factor – then the creativity came. Making a nail hover, creating a string of objects, discovering that they didn’t all have to touch the magnet, discovering that different objects would ‘stick’ at the same time.  I SOOOO enjoyed listening to their conversation  – discovery – joy. I just wish y’all could have heard it too! 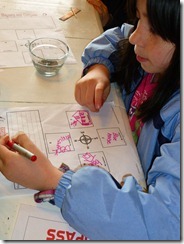 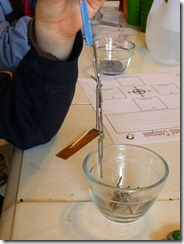 We talked about the way refrigerator sheet magnets are made, and it was shown with the metal shavings.

Our favorite was the hovering, playing with N- S ends of magnets, there is a magnet in the car, with two circle magnets hovering.  Fun.

So – After we cleaned up a bit, the kids made a huge stack of PB&J’s, while I went out with throat depressors, and set up a scavenger hunt in the yard.  Each stick had a bearing on it, and the directions were to walk in  that heading, straight, until you found the next stick, then change headings.  Each heading was based on North.  This is where the Landmarks came into play. It became important to remember your landmarks, to quickly know if you were headed off course.  The younger kids had a bit of time learning the 0-360 and being patient to find North, but they caught on quickly.

They found that the one with the compass needed to be out front – as they were walking around each other, or following someone going diagonally.

After everyone had a turn, the sticks got a little more hidden.

Everyone got three turns to navigate, and again, listening to their discussions just made me smile.  It was funny watching the kids turn their bodies to face north to find the bearing – and then figure out that they just needed to turn the compass in their hand. I completely hid this last stick in the forest, and they had to go through bushes and around trees to get to it.  Again, the landmarks of where you started was discussed, so they could turn around and make sure they were still going straight on their number.

It was a lot of fun watching them work together, I’m excited to group up with these kiddos once a week for a while!

Join us in our fun at the Outdoor Hour Challenge!!!

The Transparent Thoughts of an Unschooling Family of Boys - Answering the question - What DO you DO all day?
View all posts by +Angie Wright →
This entry was posted in Outoor Hour Challenge, Some Schooling and tagged compass, HomeSchool, magnet, Oregon. Bookmark the permalink.