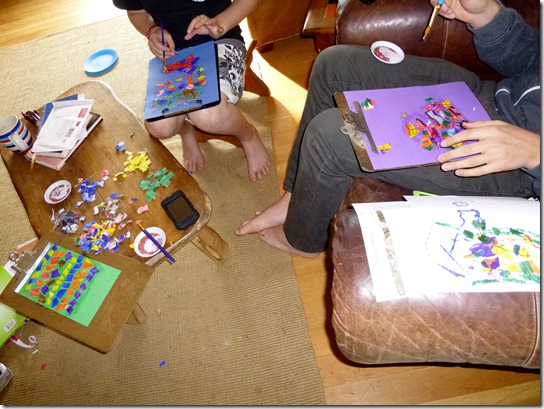 So, this is how it went down.

We are still in Ancients for History-  Greece to be specific. We’ve done the maps, been working on the art for weeks.  Read the stories. Watched movies about the Greek Gods.  I’m ready to move on to Rome already.

I knew we’d be out of town for the Surf Competition so I ordered the Drive Through History, Greece DVD from Netflix. It has 3 episodes on Greece.

Today’s art project made me happy.  Color white paper with Crayola markers. Rip the papers to create tiles.  Glue tiles to construction paper. Voila. Art. Their idea  was to wrap a pencil cup or such. I like just art.

We sat down to watch the DVD and I passed out markers, a clip board and copy paper to all three of us. I showed the boys the project online. They were not thrilled.  My idea – was that we’d color the paper while we watched the DVD. I got blank stares.

Nate spent a large amount of time drawing really detailed little odds and ends on his paper. I mentioned that his project would take forever at that pace. He enjoyed coloring the patterns and drawing.  Draw, color it in.  I tried not to moan out loud.

Jon refused. He colored a 2×3 square of each color and put his board down. He declared it the worst project yet, and “normally I really like them, but this is dumb”. 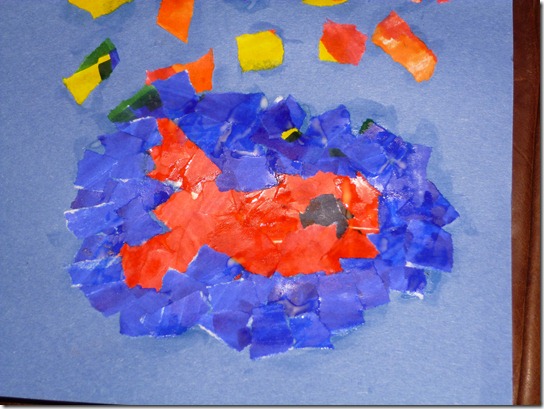 I went through and colored up 4 pieces of paper. Then started tearing them into strips. Then into tiles.  Then I got out some sushi plates and poured Elmer’s glue in. Grabbing some large paint brushes, I put out enough for 3.  Paint the paper, put on a tile, paint the tile.  Jon got excited. He started his project. Then he asks, “Can we use your tiles?”. Yes, Of Course.  I had him.

They played with the tiles long after the movie was done. Which, but the way was outstanding. Watching and hearing Paul’s story in Greece while seeing where he was – we had to stop the video several times.  AND, we had printed out a page telling about the three types of architecture of Greece and the narrator used those words in the video! Very cool.

At then end of the hour, making tile mosaics was officially declared the, “funnest thing we have ever done” by Jon.

We are officially loving our curriculum from Harmony Fine Arts for sure. But ya’ll knew that right?

Fyi – in case you wonder, Nate has a lot of detail in his tiles and in how they are laid out. I am the OCD person who likes order and pattern. Jon loves fishies in the water and then kept making more tile pictures.  I think you’ll figure out which art was created by which person.

The Transparent Thoughts of an Unschooling Family of Boys - Answering the question - What DO you DO all day?
View all posts by +Angie Wright →
This entry was posted in Some Schooling and tagged ancients, Art, greece, History, HomeSchool, hsbloggers, mosaics, tile. Bookmark the permalink.