Have I mentioned that Jon really likes longboards? I think it started last year when he borrowed a stranger’s board and placed 3rd in the 2012 Cape Kawanda Longboard Classic.  He worked this past year to up his game and came in 1st this year!

Through last winter, many people have tried to talk Jon into riding a short board. He likes it, but not as much as his longboards. In June, the Otter Rock n Roll was scheduled while the Pacific Ocean was at 1-2 foot swells. We rented a 9’ soft top from the Oregon Surf Shop so that he could at least stand up on a little wave.  He ended up winning first place this year on the surftech soft top. Hubby went back to the shop the next day and bought a new version of the rental. Since then, Jon’s been known as the Fearless Charger on the Red Board.

Now, many surfers have been trying to convince Jon to switch to a performance board. He has been resistant. Until .. . He hooked up with Rob Russo of Russo Surfboards. Rob has been a huge encouragement to our family. Jon has been learning about the various shapes and sizes of boards. I have learned quite a bit of what type of board you would want for which wave. Surfers usually have a quiver of boards to chose from for different conditions.

Rob convinced Jon to switch to a performance board and they have been working together to shape a custom board. Since 1986, Rob has personally shaped, airbrushed, glassed, sanded, and finished boards. He has taken Jon’s surfing style and ability, and incorporated them into the specific design characteristics Jon requested.

We didn’t know that he can make any board for any shape or purpose. Which makes sense. . . we just had a smaller vision since we typically see the longboards with the Russo name on them. Short Boards, Kite Boards, Longboards to SUP boards. We’ve seen boards that the owner has helped to add color to, and the person has input into the design as well.

As you can tell, I’m pretty excited. If you are traveling up 101, he also stocks boards in various surf shops, our favorite, of course is the Oregon Surf Shop.

We got the call yesterday that Jon’s board had been shaped, so we ran over to check it out. Rob was working on fixing a SUP board, so he had to get it out of the way first.

Jonee checking out the rocker in the front. Not sure it was a good idea to let a 12 year old design a board, but Rob was really patient. We surf with his family often and he put in characteristics that would help Jonee turn down the line faster after he drops in.

How thick is that board?  A hair over 3 inches. 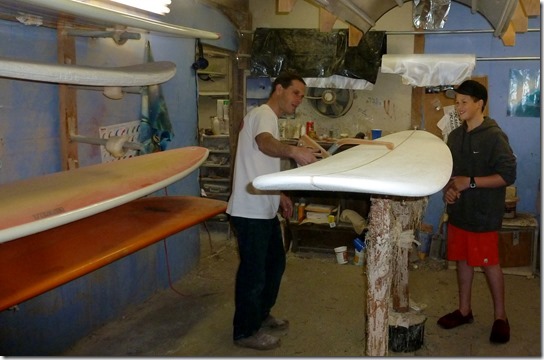 One of Jonee’s requirements was that he would be able to fit his arms around the board to carry it.

Rob’s number one requirement is that he never sees Jonee dragging the board behind him on the beach.  Just to make sure it doesn’t slip, he’s going to put in a handle on the side. Custom Longboard for a 12 year old! 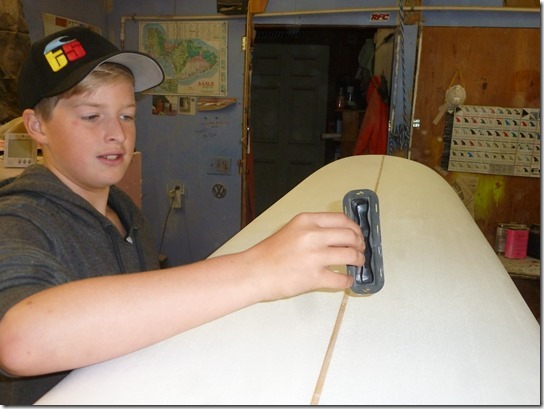 We’re pretty excited.  Now it is time to finish up the board. Lot’s of discussion on the colors, design, patterns, etc.  I’ll keep it quiet until the reveal, other than the Russo Logo – it’s a surprise.

Disclaimer: We are not an affiliate for the Oregon Surf Shop nor Russo Surfboards. We just LOVE the people and the companies. Jon is joining the Russo team, sharing the stoke out in the water, so you’ll be seeing more photos with the Russo name in them. He is on the Oregon Surf Shop Team as an Ambassador of Stoke. He loves encouraging people in the water and has been begging me for the past hour to head to the shop so he can hang out with the guys there. He’s their #1 Surf Shop Rat. I will receive nothing for this post, other than hopefully a smile.

The Transparent Thoughts of an Unschooling Family of Boys - Answering the question - What DO you DO all day?
View all posts by +Angie Wright →
This entry was posted in Beach Schooling and tagged custom boards, HomeSchool, HSBlogger, kiteboard, Longboard, Oregon Surf Shop, russo surfboards, Surf. Bookmark the permalink.