What is a Slab?

(I can share the What – just not the exact Where.
So if you have happened upon this blog for the location, you won’t find it.

We got a call early one morning that a friend was going to climb out on a cliff to watch her husband and his friends ride the slab. I know sort of where it is. In theory. I know how to watch it from afar. But to get up close – takes billy goat skills, knee pads, and forest navigation. The last time we tried to get a perch, I spent over two hours wandering around the forest with my son. We were in good company running into other folks trying to find the path. By the time we were somewhat close, the slab had calmed down and the ski’s went home. 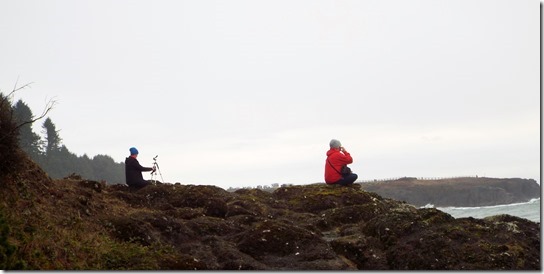 We adventured a bit further this time, following a friend who knew, and ended up climbing on  the cliff to have a sit down. It’s not a bad way to spend the morning.

The slab is crazy. It is a massive thick batch of water that sort of comes out of the ocean, and then, as if by elevator, drops down below sea level, while keeping the form of the wave inside. When you drop into it, you are quite literally dropping down. Regular waves rise up, with the swell, as the core of the swell hits a reef or the shore, lifting the core up and forming a wave. The board/surfer rises up on top of the swell and drops into the wave. This week – 10-30 feet above sea level. The slab is the opposite.

See the far right? That is the sea level. The wave is carved out of the ocean.

The rest of the ocean behaves properly, and the waves have been amazing to watch this year! Jon had my camera on this day, he took the photos!

A picture of me, taking a picture of lichen and tiny plants on the cliffs.

From my phone. Tiny Tiny. You can see the size of the tiny moss and lichen, that heart plant is smaller than a dime.  We have not started many Nature Studies this year, with notebooking pages – but everywhere we go, I hear the boys comment on something we’ve studied as they see it in nature. The Queen Anne’s Lace above is a photo by Jon. Year Round Observations. Amazing that the plant can stay in place while the Ocean Waves smash up against these rocks at high tide.

So – We didn’t do Algebra today. But it was still a great day!

The Transparent Thoughts of an Unschooling Family of Boys - Answering the question - What DO you DO all day?
View all posts by +Angie Wright →
This entry was posted in Beach Schooling, Geography and tagged Grom, HomeSchool, HSBlogger, Oregon, Photography, pnw, slab, Surf. Bookmark the permalink.